As a physician and therapist, working with PTSD and trauma, what is the best way to do an old-school ad? 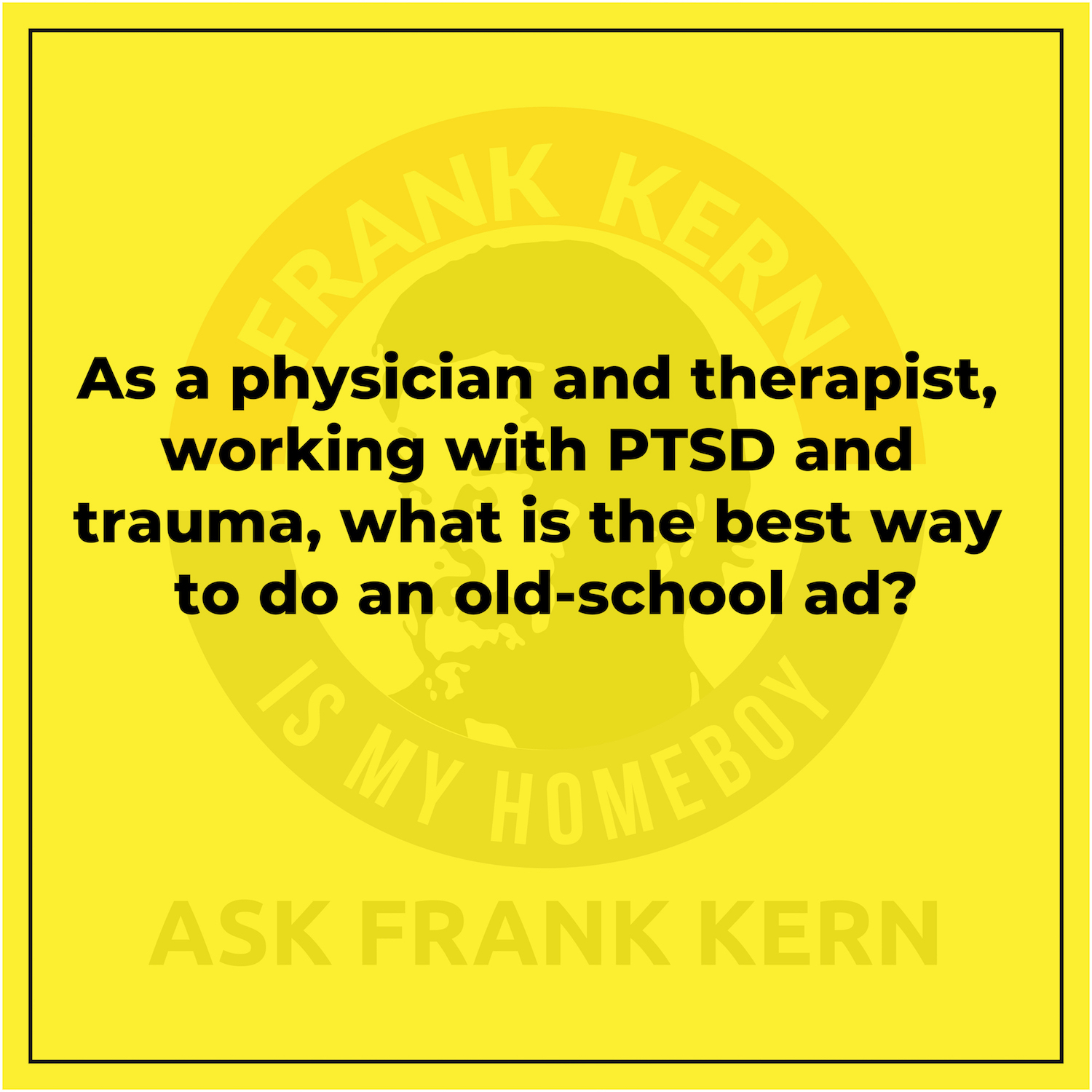 So I've got a physician and a therapist and she's working with PTSD and trauma. Wondering what the best way to do an old-school ad would be with this.  Oh, "read this if you..."

All right. We've got some good ones. So I've got  is a physician and a therapist. Um, she's working with PTSD and trauma. Wondering what the best way to do an old school ad would be with this. Oh, read this. If you, uh, if you suffer from PTSD or trauma and I would have another one that says, read this.
If you have a loved one that suffers from PTSD or trauma. Yeah. And that's, that's it, you know, and they expect that you're going to get a lot of, I mean, it's really, really broad, so you can have a whole lot of leads. You're gonna get a lot of leads there and you might find eventually that there needs to be some filtration process.
Post-click, uh, you know, so you're not calling the zillion people unless you have other people on it. And in that case, it doesn't matter. It's, you know, that's their job, but that's pretty simple. All in the copy, right? Yeah. Just like with something like that, you know, it's, um, it's going to be super broad and that's, you're, you know, you're going to get a lot of people and that's not, all of them might be your perfect person and you just have to sort of accept that and then start to dial in, you know, the targeting, et cetera.
As the ago. So that's where, um, for example, that, and I wouldn't do this at first, I would literally just get a whole bunch out and see what happens cause they're going to be cheap, you know, but that's where this little approach from yesterday came in and get out of there. Uh, there we go. Okay. I find this to be easier.
All right. So I'll duplicate this real quick and let's pretend right. If we go with something like
PTSD national center for PTSD, and that's a pretty good one. Okay. But that's not too broad. Um,
Traumas one 30. That's not too broad either, but this is all pretty good. Um, let's see, what else would we have? Psychology.
Okay, so that's a huge one. All right. Or either mood psychology. And by the way, when Facebook determines these interests, it's not just that people say. Hey, this is what I'm interested in. Facebook will determine that a user is interested in this by their behavior on the platform. So they'll determine that someone's interested in psychology.
If they click a bunch of psychology related ads, if they read a bunch of psychology related posts, they watch a bunch of psychology related videos. If they make psychology related posts, like their machine is brilliant, you know? So let's say you chose this as a gigantic Rican thing. Um, you might want to further narrow that audience down by going.
Narrow audience. And then let's say army, boom. So now this is army people that are interested in psychology and they, so there's a good chance that now we've got still 9 billion people, by the way that now some of these folks are not necessarily saying I'm interested in psychology, but yeah, they're reading stuff that could be not share Madame screen.
Am I. Good award every time. Sorry guys. I'm a genius. This is what I'm trying to show you. Hang on UNO. Oh gosh. Now I just published the ad. I hit the wrong button. I have published instead of share. Great. Um, okay. I need to turn that one off real quick. Hang on. This is what I was doing in the, uh, audience selection over here.
Come on. All right, here we go. And, uh, and the audience selection, I'm going to show him how to narrow this down by saying, okay, psychology, huge, right? There's 65 million of them. If we go that broad, you're gonna get everybody. But if I say they also must match army, now we got 9 million of them, but there's a really good chance that that audience is in there, uh, et cetera.
And so you're going to test a whole bunch of them and see what happens. And that's the only caveat there. That's it.