Do you have tips/recommendations to optimize engagement and click-through rate? 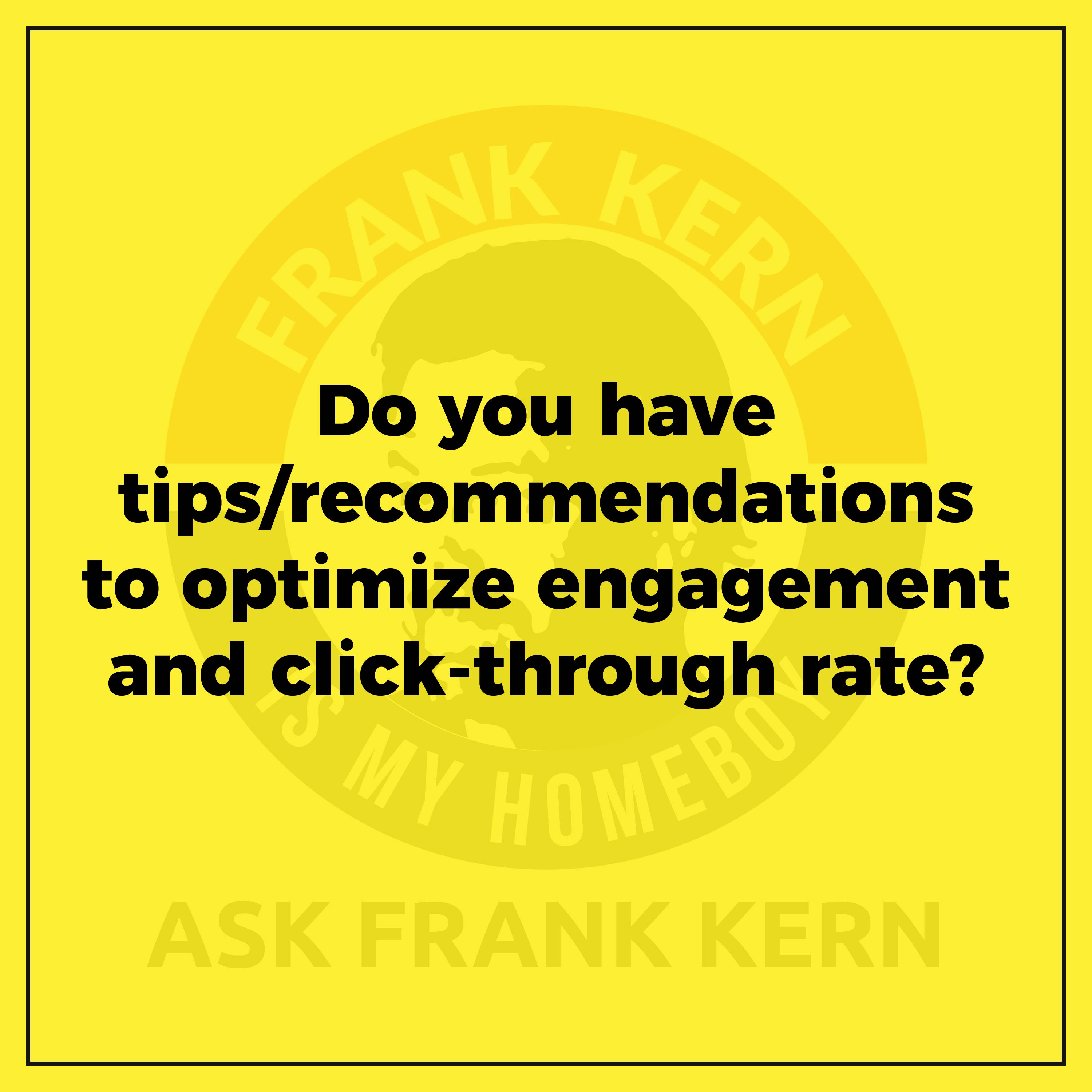 I'd really like to see what I can do to optimize engagement and click through rate on our current email newsletter. I'm seeing that our lead magnet, it has a great open rate. It's an 80% open rate, 60% click through, and then subsequent emails out the...

Thanks for showing up, my question, specifically around email marketing. Any kind of tips, recommendations, I'm kind of in the early phases of kind of building our list and our audience, even some of the Nick's, recommendations on GFO stuff and getting ready to, to launch our first, uh, sales product to our internal list, but really like to see what I can do to optimize engagement and click through rate on our current email newsletter. I'm seeing that our lead magnet, it has a great open rate. It's an 80% open rate, 60% click through, and then subsequent emails out the gate, you know, it's about a 20/25% open and 6% click through rate. What recommendations do you have to really kind of help boost that sort of thing?

I dunno if you can really boost it, those are pretty good numbers actually. And it's in line with totally normal, normal human behavior, cold, you know, like everybody does this, like, you're like, dude, I'm really into that. I'm like, eh, I'm distracted. And that happens that cycle with entrust is shorter and shorter and shorter. Um, so the, the trick is twofold. Number one, you want to get your offer in front of people quickly as possible while they're interested, you know, and wrap that around good will. And then number two is you want to behaviorally segment the list. So track your openers, track your clickers track, what they click on, and then them in sub sequences based on that behavior, right? That's the trick to it, you know? And, um, three, I guess, would be a lot more email. So what, what we failed to understand is that how rude and inattentive our subscribers are, you know, like they don't actually read our stuff and it's normal. So, you know, it's like you and I work online all the time and we're on desktop computers and we're constantly checking stats and email and stuff. Then the rest of the world's just standing around with their phone in the line at Starbucks or whatever driving, you know, and they'll look at it and then they'll come in and cool, I'll read that later. And then they won't and the next time they check their email, they have 35 more emails and it's buried. So a lack of opens and stuff doesn't mean a lack of interest. It's just the way it is.

So email them more, like track those opens and email your unopens a whole lot more and give them a chance to see the message again. Cause it's not like they're going to get mad. They're like, oh my God, I didn't see the other email he sent me, but I'm real mad at him for sending this one. Like they don't know you send them the other one because they never saw it really, you know? So that's it. You mentioned a segmenting, you know, those who open would you basically just dump them into a bucket and then you would actually sell to those as opposed to not selling to others. Oh, yeah. So they're rule number one has never sent an email with that deliberate objective. Right? So like I got scared by newsletter. First of all, when you're like, Hey, I have a newsletter. I'm like, Oh man. That's like, what's the point? You know, here's an email with something that there with no opportunity for you to give me money. So. I never personally, I'm going to send an email without an objective.

So one example of segmenting opened and then following up with them accordingly, what, and this is like really, really dog whistle type of copy, but it works would be, let's say we've got a, I dunno, you're selling weight loss or something, and it's a workout routine for the summer. The headline or subject line of the email would say, open this, if you want to lose 10 pounds before August 1st, and then the body copy has got the offer. Hey, I have this program, click here and go. Got it. Um, and so some people click, some people buy some don't. But they've all opened. So we're talking within the context of people who open, you can say I've met those openers and now put them into a debt, the line sequence leading to the sale. It's okay to follow up with those people with a lot more aggressive email patterns, because they behave really indicated interest because they opened an email that said open this, if you want to lose 10 pounds by August 1st. So it's a, that's a rudimentary example, but that type of stuff works really, really well.