Do you think there's any connection between the MK-Ultra experiments and modern marketing methods, especially the ones that have a background in NLP? 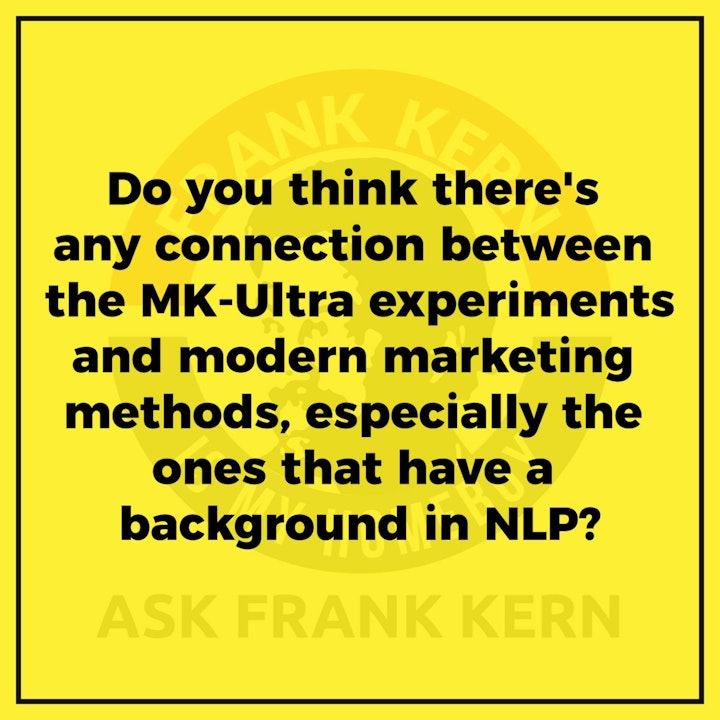 Do you think there's any connection between the MK-Ultra experiments and modern marketing methods, especially the ones that have a background in NLP. Okay. Number one, I don't know...

Do you think there's any connection between the MK-Ultra experiments and modern marketing methods, especially the ones that have a background in NLP. Okay. Number one, I don't know. You know, so for those of you guys that don't know, MK ultra was an experiment that was conducted by the United States government, where they gave a group of volunteer military personnel psychedelic drugs. And then I think they gave people psychedelic drugs without them knowing, and they did all kinds of other mind stuff. And that's really all I know about it and I'm probably screwing that up.

So I don't know if there's any connection really between that, but another way to look at that question is, What do you think of subliminal marketing and subliminal advertising? Does that work? Does NLP work in marketing and advertising and do those cool stuff like that work? And my answer would surprisingly to most people be, I don't think so. You know, and here's why, here's why I don't think so. I don't think that it's relevant. I don't think it's really easy. To use any sort of Hypnos stuff or language patterns or whatever, to get somebody to do something that they don't already want to do. All right. And so if we take that as an established, I don't know if I could quantify it as a fact. So I'll just pretend as a fact, right. So let's say, we accept this to be true. That really no degree of word patterns in LP, XR squared, is going to really get someone to buy the thing that they don't want to actually buy in most cases, we accept that to be true. Then we could accept it to be true, that it's really kind of dumb to mess with it. And it's a lot smarter to be like, let's find all the people that are interested in this stuff and then create very compelling and logical arguments on why they should get it immediately, and let's put some emotion in there as well, you know, and appeal to other non-logical things like the need for significance or whatever it might be that they may have. And I think that's more effective than trying to be sneaky. I think NLP was developed as a therapeutic tool. I think it's probably really effective as a therapeutic tool. I'm certain you can sell with it. I just don't think that long term using that kind of stuff is going to be as effective as just finding a market of people who want something and putting that thing in front of them and make them just a real good case for it. You know? And I think the person that really proved that among many people, in my opinion, for even a vote, probably the most famous person who proved it would be David Ogilvy, the great advertising legend. You know, so if you read his ads, like if you were to look at the Rolls Royce ad that David Ogilvy wrote. The headline famous 60 miles per hour, the loudest thing you can hear in the rolls Royce is the sound of the electric clock or something like that. If you were to read the body copy of that ad, it is 13 facts about the car written as a numbered list with a call to action at the end, you know? So there are countless examples like that of his work and other agencies works in the past where none of that was necessary whatsoever. So for me, personally, and I know, you know, I'm sure people would disagree and it could be debated. And there's probably plenty of examples of, you know, Ninja techniques that are being used. But I think it was a whole lot easier just to be like, Hey, if you want your cat to stop, you know, clawing your curtains, read this here. Here's why this anti curtain clawing system is going to really help you. I think that's way more effective personally.