I keep getting unqualified leads from Facebook. Do I need to use LinkedIn for this type of audience? - Frank Kern Greatest Hit 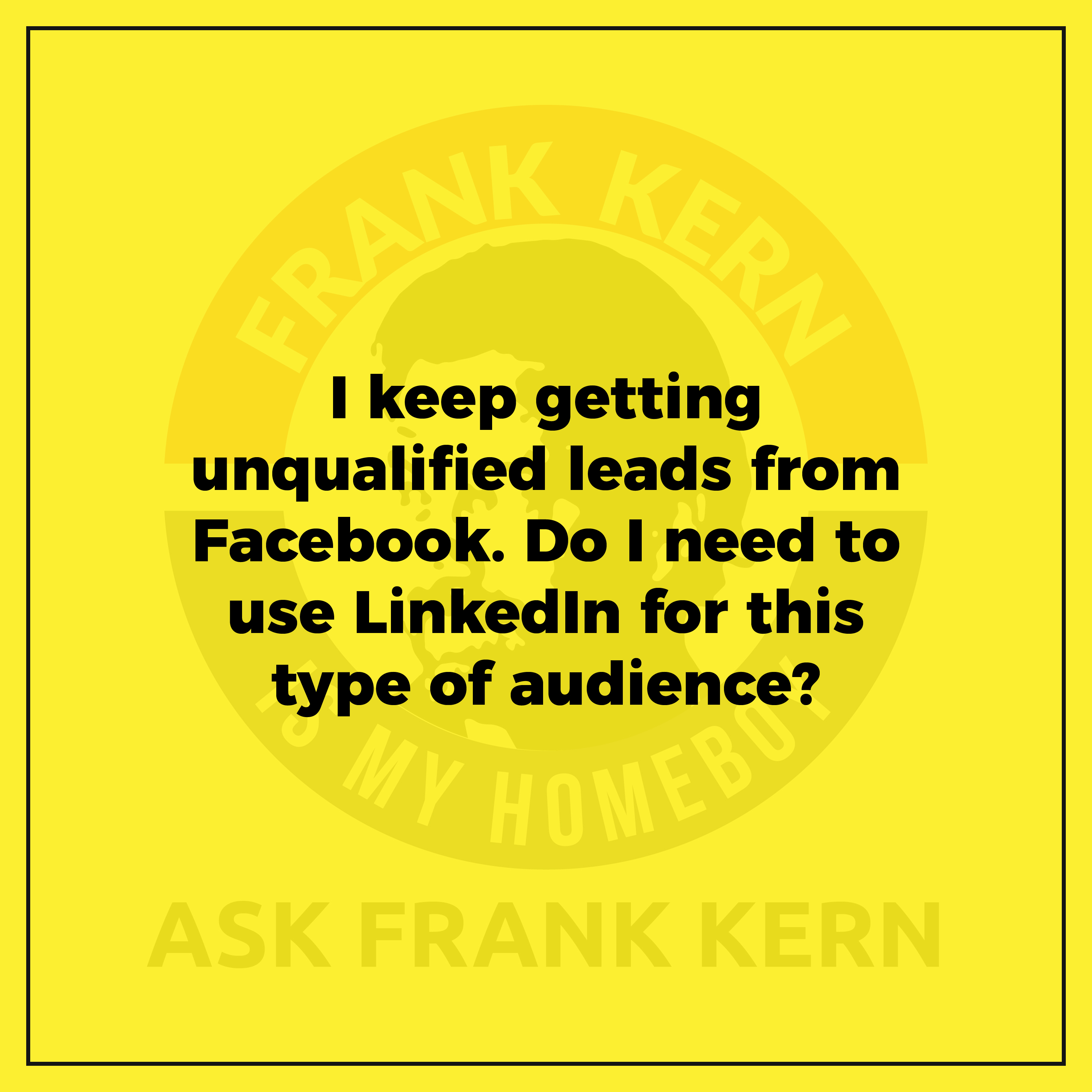 So he had a question about his lead quality. His audience is executives and entrepreneurs. He said in the past, he kept getting unqualified leads from Facebook. He was wondering, are they active on Facebook or does he need to use LinkedIn for this...

So he had a question about his, um, lead quality. So his audience is executives and entrepreneurs, he said in the  past, I've you keep getting unqualified leads from Facebook.
He was wondering, are they active on Facebook or do I need to use LinkedIn for this type of audience? Hmm. Okay. So to you, I would say concert welcome to the club. So there is no magical qualified lead generation system. We've, we've gone as far as to have stuff like we'd gone so far down the rabbit hole of trying to filter people out that we've set up systems where it's like, here's the thing.
Here's how much it costs. In order to talk to anybody, you have to click the box that acknowledges that, you know, how much it costs and that you can pay for it and that you do want it. And then we'll still get there on the phone. And they're like, Oh, I ain't got that kind of money. You know? So it's, you're going to have to.
Um, except that as part of the deal, you know, I wouldn't try to do any targeting by income. I don't think any of them, the data is accurate. Cause back when you could do it on Facebook and I don't mean maybe they reinstated it. I wouldn't do it though. Tested it against no income targeting gutsy zero difference in caliber of lead, by the way, some will and some won't.
And that's kind of how it is. Um, what does have an effect though? On who you're attracting is the lead magnet and the bait. Uh, so, you know, you might have heard me talk about whale bait versus minnow bait in the past. So men bait to something like how to start a business on a shoestring budget. Even if you have no idea what you're doing, I was like, okay, that's weird.
Like, you know, you a don't have a budget. So if you're reading how to start a business, B. You probably have a shoestring budget and see no idea what you're doing, which doesn't mean it's a bad customer, but it is a bad thing. The customer, if we're selling like professional services level consultant or something.
Right. So that would be an example of minnow bait where whale bait might be. Read this, if you're looking to scale your company and want to replace yourself as soon as possible, totally different person, that's gonna read that content. Right? So the best way to filter is to use whale bait content and whale bait copy as well, post a minnow bait.
And I'm real common thing that we see all the time who are those clients that we had. It was in a private client group. Then the guys were, um, I won't say who they are cause they're famous, but they're cool. They probably wouldn't mind, but still, um, but they're like, dude, we just keep getting people without any money.
And like it's weird, you know? And I was like, well, just make sure you're not running an ad. That's like, here's my webinar formula that shows you how to make an extra $5,000 a month on autopilot. And they looked at each other and they're like, dude, this literally what we're running. And I'm like, well, you know, if the person is looking to make an extra five grand, they probably can't give you 20.
You know what I mean? So it be like, here's how to make an extra 200 or here's how to grow by this many X or here's like more Wally stuff. So I wouldn't discount the source, which is Facebook and be like, Oh, this machine that has 2.6, 1 million people that are largely my age, by the way, has they're all broke.
It's probably just a, the numbers and the way it goes and be the bait that she was using