I would like some advice on how to form my copy, so it gets approved. - Frank Kern Greatest Hit 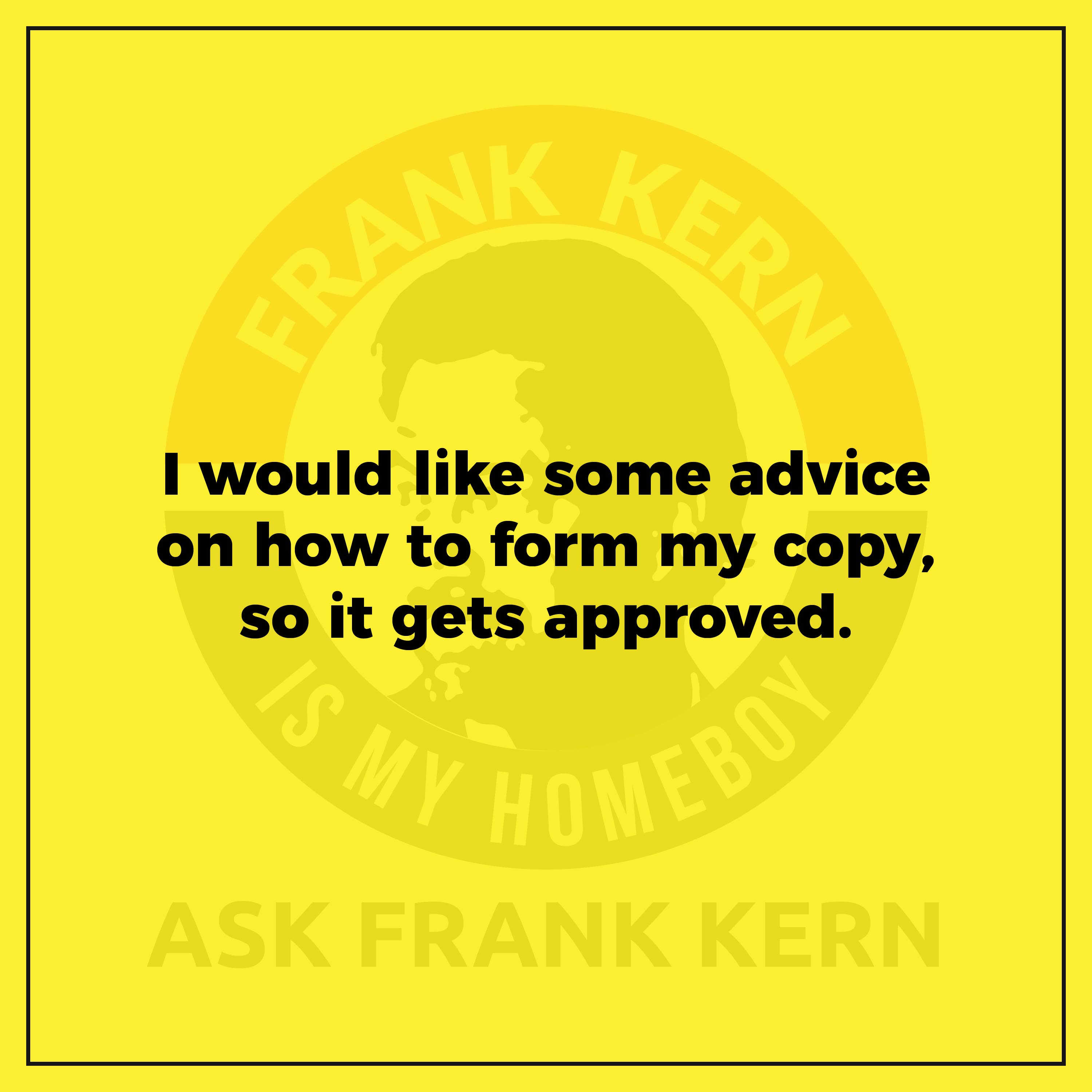 I had some problems with the ad approval. I'm selling mortgage and basically I'm trying to base my ad upon the refinancing of the mortgage. So I would like to ask you for some advice, for my copy, so it doesn't get not approved.

Season 2 Ask Frank Kern
Transcript
So I had some problem with the ad approval and I'm selling more to the mortgage and basically I'm trying to base my, uh, upon the refinancing of the mortgage. And so I would like to ask you for some advice, how to, maybe for my copy, so it doesn't get, uh, not approved. So did you put up an ad yesterday? And I got declined. Yes. Like it declined. Uh, I reviewed it. I, uh, uh, I changed it like two times and it got, uh, uh, it did not get approved also. All right.
And did you submit the appeal? I might not have told you all this. I might have told someone else. I might've told another class. This, did you submit the appeal through desktop or through your phone? Uh, you mean the, the, the edit. Right. You go to appeal the ad and you're like, Hey, will you please appeal your, your decision to, um, your decline?
You know, when you resubmit it for review, did you do it from your computer or through your phone? Uh, through, through my computer. Okay. So there was a hack and this, I don't know if this will fix it, but before we start trying to fix the copy, it's highly unlikely that a real person was at this stage. So go get the Facebook ads app on your phone.
All right. And then look it up and you will get whenever you get a decline or anything, you'll get like a little. Message thingy there and you click on it. And so I don't have a decline notification, but let's say you have, like, you would actually see a thing in the messages that said, Hey, your ad was declined or rejected or whatever.
Um, you can click that message and click the, submit an appeal button in the phone app. And you can actually. Type a response and it goes to a person, dude, I know it's the most backwards as sounding thing in the world, but for whatever reason, that will go to a person. So I, Ben something that goes like this would a real human, please review this ad.
I have reviewed your compliance policies. And I think this ad was triggered as a false positive by the algorithm. Please have a real person. Let me know if any changes need to be made. And nine times out of 10, that'll get it approved. Yeah. Okay. Okay. Okay. Well, thanks. Yeah, I do that first. And then if they keep declining and it's like, okay, then maybe there's something.
And like, are they giving you reasons, like giving you any reasons that make any sense at all? Or is it something down like yourself? No, they just, they just basically said that, uh, you know, I can't put it up for a, for a specific, like a, you know, a situation that it has to be general. And, uh, you know, like, I can't say.
Do you have more teach and do you want to refinance? So, so that, that was probably the, the, the problem I thought, but after changing it, I didn't know what the problem was when the error was the same. , it's probably just refinance triggering it, you know? Um, but yeah, it could be the work mortgage, I don't know.
Yeah. You, yeah. And you might switch it to, um, You know, every three things everyone must know before we find out single house or refinancing the home, or are you out of it and all of that and see what happens.
But my guess is it's AI and need to submit the appeal is what it's called through your phone and it'll get, uh, it'll get approved. Alright. Alright, thanks. Yeah. And that's Curt Maly of the belt method taught me that I had no credit for it at all. We would have man, this same video ad, we get approved and then decline and then approved then decline and then approval.
They do just be like type this in your phone every time. And eventually it'll just get automatically approved every time we try to run it. And that's exactly what happened. So you'll probably be okay. I hope.