If you were starting a social media agency from square one and didn't have "proof" yet, what would your lead gen strategy be? - Frank Kern Greatest Hit 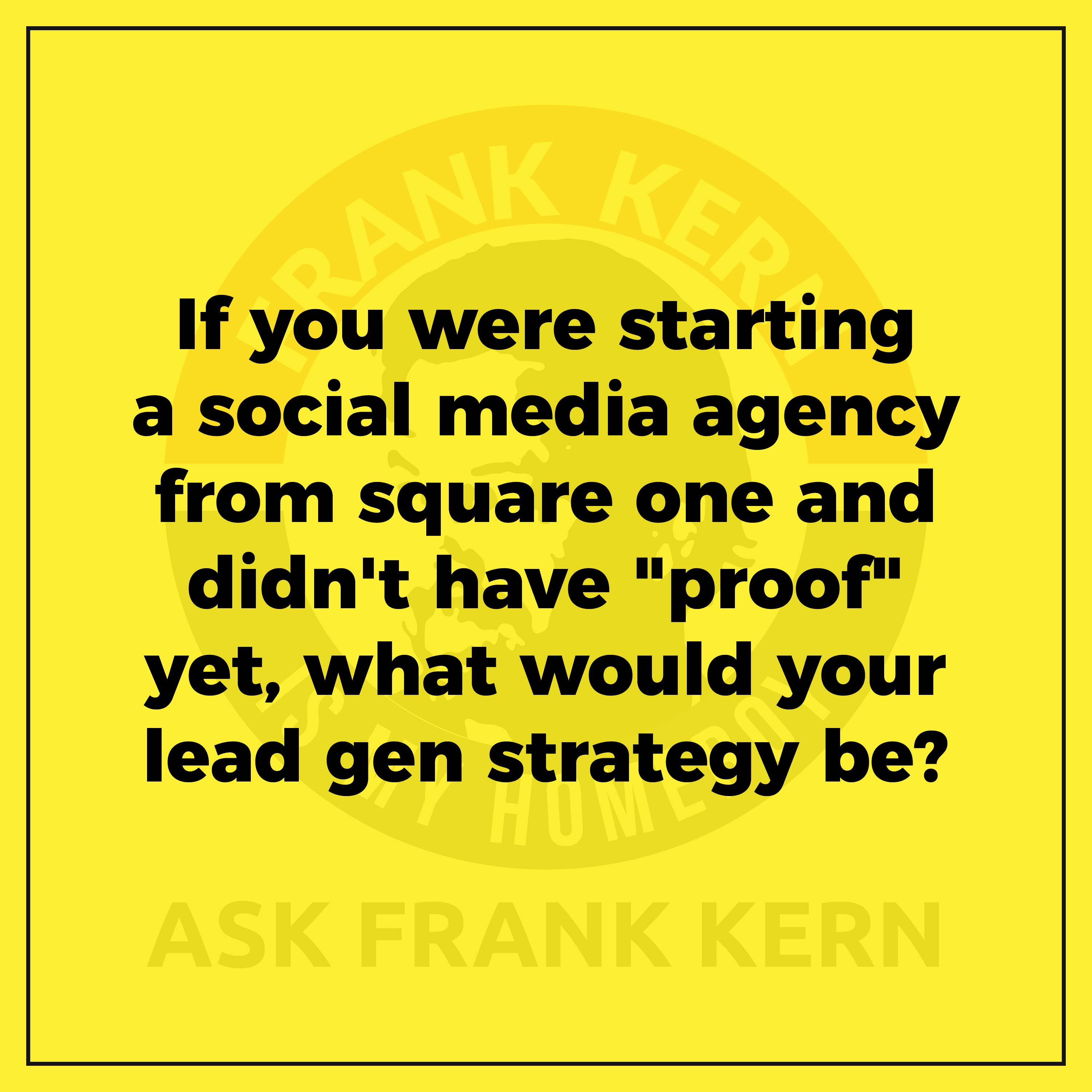 Very simple. It would be to get them on the phone, give them a proposal and see if they wanted to become a client. Everybody's got testimonials, you know. I don't really think it matters.

He says, if you were starting a social media agency from square one and didn't have proof yet, what would your lead gen strategy be? Very simple. It would be to get them on the phone, give them a proposal and see if they wanted to become a client. Everybody's got testimonials, you know. I don't really think it matters. I don't use testimonials in my marketing. Actually, I just started using it on my time to get sales funnel. And it's just people saying, Oh, I like the course, that's it. You know, this was pretty good. We enjoyed it. Um, so the only thing anybody cares about is what can you do for me? So I would do. This I would set up a lead gen campaign is Facebook lead ads. I would target whoever I wanted to target. I would start with a local incidentally. She can go meet him. If you have to, the opt in would be a PDF on how to get customers from social media. I would not worry too much about making that perfect because I doubt they're going to read it even though they opt in for it. It's just human nature. You know, I don't make it bad, but don't. Spend like 20 years trying to make it perfect. You know what I mean? Don't drive yourself crazy over it. Um, I know this to be true because when we sell books, we track how many people download the books that they bought. And so few people do that. We've had to build a, go download the book that you purchased emails, right. Just to get them to download the thing that they bought. You know? So that's not like people are dumb. It's just the way it is. They're busy. Alright. So we got the lead gen piece out of the way. I wouldn't expect them to do anything you tell them to do in the, in the post PDFs situation. So I wouldn't expect them to read it and be like, you know, you're going to have a link in there to your website and call us for a free consultation. I wouldn't expect them to do that at all. They probably won't. Um, so what I would do is I'd call them. And I'd say something along the lines of like, Hey, thanks for downloading the, uh, the report on how to get customers from social media. I hope you enjoyed it. Um, I just want to see if you have any questions and specifically, are you running ads now? And is there anything we can help you with? And then they would say yes or no, and you know, most of them be like, Oh, just look in and you say, okay, see you later. And somebody's like, yeah, man, I really need to get some customers from social media. And then you pitch them. Right. And that's kind of the, that's kind of the trick there. Nothing really elaborate in my opinion, I would keep it very, very simple and I think you'll think it'd be fine.