In building a virtual sales team, what can we expect from those bonuses? 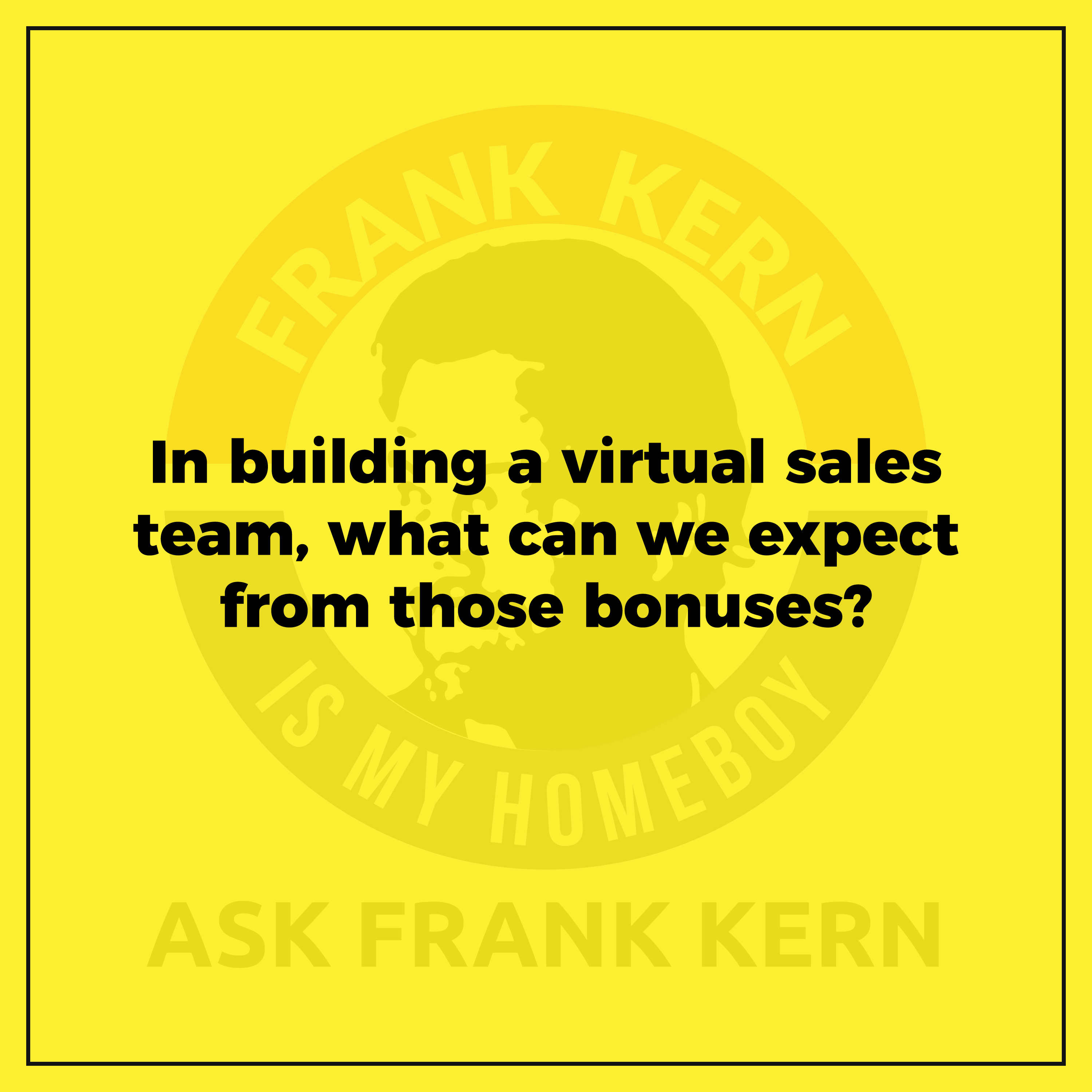 Season 2 Ask Frank Kern
Transcript
You mentioned, uh, an agency model and building a virtual sales team. So like any, uh, odor wants to know what he can expect from those bonuses. Yeah. So the virtual sales team, here's how ours works and here's, I'm going to show you how to do, um, number one, systems and automation.
So not to like, take anything away from our salespeople. They're great. And they are ethical and good people and they are. People. So it's like salespeople and all people generally speaking are not going to do what you want them to do all the time. So the huge part of what we build, and we build ours using a CRM called active campaign, but you can model it in anything, but if you use active campaign, you can literally was copied the automations, which would be awesome.
Um, so you wouldn't have to build anything out, but we make it, for example, if someone has applied to work with us, And they say, I want it. I know how much it costs and I can afford it, but they don't self-schedule and our sales person's got a break during the day that sales person's mission is, Hey, call that guy on schedule because they're obviously interested.
They apply. They just didn't. Self-schedule probably because we only allow people to book two days out. And so if you say, all right, call them. There, they're going to call them a little bit and he'd say, all right, well, I want you to call them. And then if they don't answer, which they won't, I want you to leave a message.
I want you to say this. I want you to send them an email. I want it to say this, and I want you to text them. And I want them to say this they're going to do it rightfully the first day. So huge part of our virtual sales training stuff is building that machine to where they call them. They press the button and said, didn't answer.
And then all of that stuff just happens. Right. And now what brings the prospect coming back to them conversationally. And so every time they call it fires, stuff like that off. So that's really what we're doing there is making this process. Where you can be an introverted weirdo like me, that doesn't hold sales meetings and doesn't do motivational speaking and doesn't do any of that kind of stuff.
And still has a really highly functioning sales team. Now they are good salespeople, so I'm not diminishing their skill at all. Um, you know, but a good. And so th that's part one of it. And then the question becomes, how do you attract these people? And that's the other side of the equation, which is that high ticket hit list, which is okay, how do you get people like raising their hand and say, I know what it is.
I want it, I know how much it costs and I can afford it. How do you get them? Right. And so once you have that coming in, And the ability for a salesperson to mostly just take inbound appointments. But if they don't and they're having to actually reach out to somebody, it's a very qualified person that raised their hands, that they wanted it.
And the follow-up is automated. That's how you get the good salespeople. So people like, how do you get good salespeople? And the answer is you make their job freaking easy, you know? So what do you want to do you want to sell this shit that is hard, or you want to come work with me where you press buttons and have people coming to you.
Right. So I hope I answered the question. Um, Sufficiently, if there's anything more specific I can answer. I'm happy.