In my ads, do I always have to ask for the email to make a follow up sequence? - Frank Kern Greatest Hit 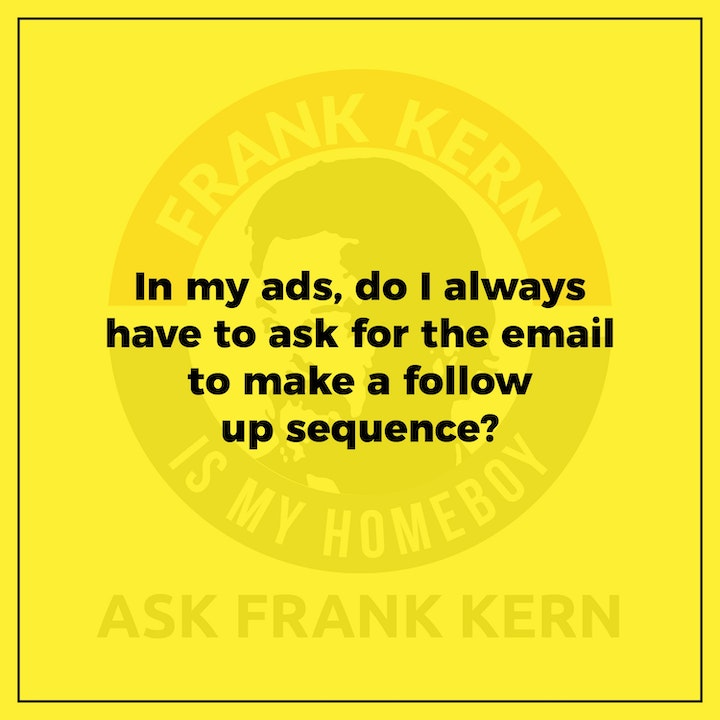 So my question is I have my ads, but in those ads, do I always have to ask for the email to make a follow up sequence or something like that?  Yeah...

So my question is, okay, I have my ads, but in those ads, do I have always to ask for the email to make a follow up sequence or something like that? Yeah.

I don't know why it's blue, but this would be my copy. Read this. If you want to use Photoshop, you know, and then, watch this if you want to use Photoshop, right? Cause it's a video. So you keep your same video. Damn it, it won't let me change. My, I still don't quite know how to use this stuff. And then, um, You would get their name and email address and then send them to this tutorial.

So now you would have the only disadvantage here is you don't control. What happens when they click from tutorial video over to the checkout system of the affiliate you're promoting. I, I have a little bit of control. I'm tracking the clicks in the, in the button of the offer. My affiliate link and the tracking system is telling me when a conversion is happening, right.

So it's like, I don't know if you're, if you were aware, aware of it, but it's through a Postback URL. Okay. I know what you mean. I didn't know that that was available by some affiliates. It's pretty sweet. Yeah. So that's, that's how I know if I made a sale or not. And the thing is I I'm trying to send people directly to my tutorial without asking them for, for the email and their information, because I don't want to create like friction.