In three years, running Facebook ads has changed a lot, and here you are in front of your laptop. I just wondered what you'd learned, what changed, and why that was possible? 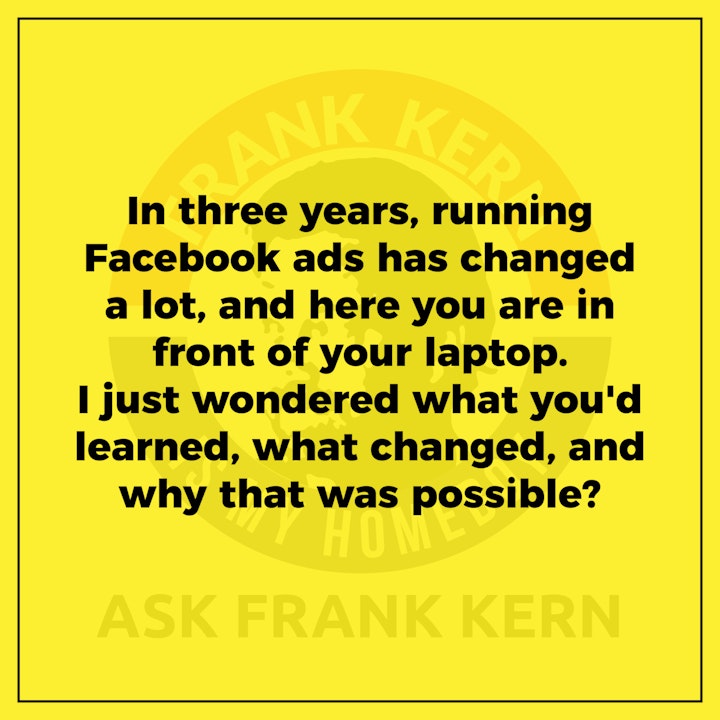 So I'm just thinking, like three years ago, with the inner circle and everything, you had all these Facebook consultants and agencies and it was a huge drama to run Facebook ads, but you always had a team to do that. Now here you are, in front of your...

Ask Frank Kern
Transcript
So I just thinking like three years ago, like with the inner circle and everything, you know, you had all these Facebook consultants and agencies and, you know, it was a huge drama to, you know, to run Facebook ads and yeah, but you always had a team to kind of, to do that.
And now here you are in front of your laptop and I just wondered what you'd learned and what changed and why. Why is that what's possible now? Oh, I just like doing it. Um, yeah, so I was like, I was like, everybody else, like, Oh, this is magic. You know, this is magic and you got to get a person that can do it.
And that person has to obsess over it. Constantly and in order for it to work and to a degree that's true. Like when you get to spending a whole bunch of money, you know, once you crack like five grand a day or something and ad spend it's, you're hitting a refresh a lot, you don't really set it and forget it.
Um, you know, actually there is a strategy that, that you can do, but it's, it's less profitable in my opinion than screwing with it all the time. Um, but what I've found and out of no, Disrespect to the folks that I've worked with before, and I was just freaking better at it. So it was like, wait a minute, I'm paying these dudes a lot of money and they're pretty good at it, but I like doing it and I'm better at it because I can write like me better, you know?
And I can market to my audience as myself, better than someone else can. And, um, well, it's not really that hard, uh, you know, so. That's why I do it now. And so I manage every single one of our campaigns. I don't manage my own YouTube stuff, um, because I don't understand it yet, as well as I could. But I'd like to, um, but eventually we'll, you know, but yeah, Facebook's, I mean, it's a pain in the ass, but it's kinda cool.
You know, I mean, there's not a whole lot better than refreshing me. Like, Ooh, we made this much and we only spent that much. Yay. It's a little addicting.