Is SEO dead? How much should I worry about it for a blog/biz website? - Frank Kern Greatest Hit 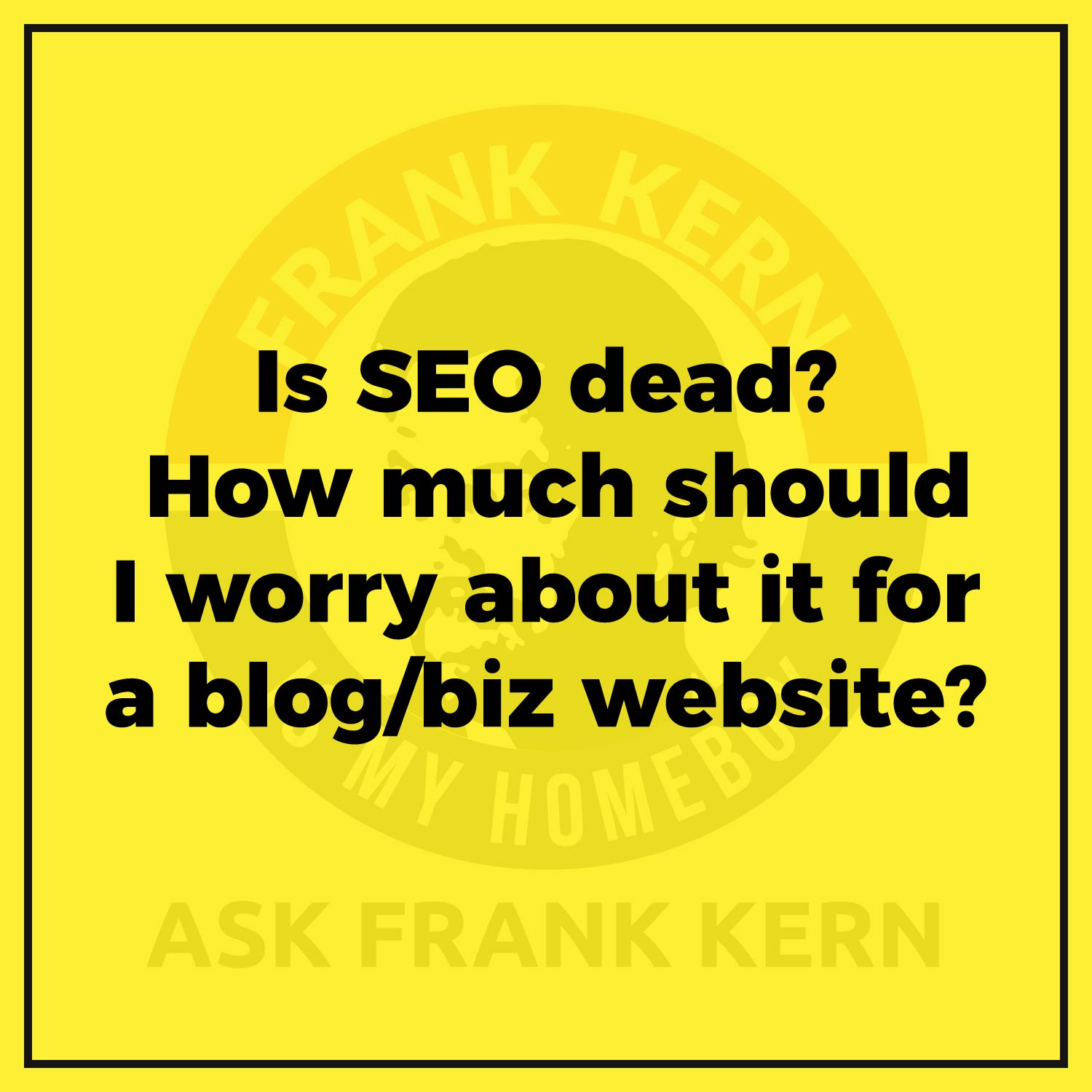 Here's a pretty good question. Is SEO dead? How much should I worry about it for a blog/biz website? Well, I'll give you my answer with a disclaimer.

Here's a pretty good question. Is SEO dead? How much should I worry about it for a blog/biz website? Well, I'll give you my answer with a disclaimer. I don't know anything about SEO and, I'm certain that people who are very good at it are really benefiting from those skills. So if, if I were a cosmetic surgeon in Beverly Hills, I think it would be very, very beneficial for me to be ranked number one as Beverly Hills cosmetic surgeon. So in that regard, no, I don't think it's dead at all. Personally.

I don't mess with it whatsoever. And the reason why is, I don't know how to control it. It ain't saying much, but Google is a whole lot smarter than me. So when you're doing SEO, you're trying to outsmart their algorithm and some folks are, can do it. You know, I'm not saying it's a dumb thing to do. I'm saying personally seems like too much work. I'd rather just pay money for the ad that I can control, you know, and then all I gotta do now is make my ad perform better than the other guy, you know, so if a Beverly Hills cosmetic surgeon costs $30 a click, if I can figure out how to make that click worth 60 bucks that I can pay that $30 I can pay $40. One of my competitor might only be able to be paying 30. So I like that control a lot more.

I think it's extremely important for all businesses to really get good at turning advertising into profit for a couple of reasons. Number one, you can control it. You know, like it's not subject to the winds of algorithmic change. Like search engine stuff is it's not subject to the whims of people. You would rely on to refer business to you. Like referral marketing is or affiliate marketing is or whatever it is, subject to your skill and talent. And the good news is a lot of folks are very skilled or talented at turning advertising into profit. So if you get even moderately good at it, they are to be in pretty good shape, especially if you're in a normal market, so if you own a dry cleaner or something, Oh my gosh, you just, all you gotta do is do, like, I call it a TV on the phone. All you gotta do is video ads that are basically TV commercials for your dry cleaner, with an offer and show it to everybody within five miles of your dry cleaning store, that's between the ages of, you know, whatever working ages. You know, 25 to 65. I don't know whoever would use dry cleaning. It's so dang cheap to do that. You can't help, but win there. And that effort in my opinion, would be way more profitable than trying to figure out how to outsmart Google. But for those people out there who can outsmart Google, I say, Hats off, you know, and well done. And you're very, very intelligent and a lot smarter than me, which again, didn't say much.

And the final thing I'll say about turning advertising into profit is the function of doing any function of any business period is to multiply capital. That's all you're doing. In business, you know, so if I own a used car lot, the function of that used car lot is to multiply capital. Meaning I go to the auction, I buy the Toyota Camry for a thousand dollars. I mess with it, you know, clean it up, get some new tires or whatever. At the end of the day, I've spent $1,300 getting this thing sellable. I now go and sell it for $2,000. I multiplied my 1300 bucks. I multiplied that capital. Right? So it doesn't matter what the business is. The function of the business is to simply multiply capital we could be selling. Anything, could be a restaurant, barbershop, doesn't matter. It's all we're doing, what ads allow you to do is to multiply capital at an alarming rate of return if you get good at it. So for me personally, I'll run ad campaigns. That'll get, you know, I'll put a dollar in today and I'll get $3 back today. And if you annualize that, that would be whatever, you know, people who are better at math and make it figure it out. But it would be like an annual return you kept on doing. It would be an annual return. Thousands of percent literally. And whereas the greatest investors in the world like Warren Buffet and Ray Dalio and all those other dudes that are super geniuses, their annual rate of return on investment is an average of 20 something, maybe 30 something percent of the money they put in versus the money they get out. So none of this is very appealing, you know, to a beginner person or to someone who is shortsighted. But if you can get good at like putting a dollar in, and even if it takes you two months to get $2 back out, you're beating almost every other investment vehicle on the planet. And you've got a lot more control over the process. So that's why I'm not that big on SEO. You know, that and I ain't got no sense. I ain't that smart, can't do it.