Is there an email sequence or best practice to get more people to say yes to a live offer by a deadline? 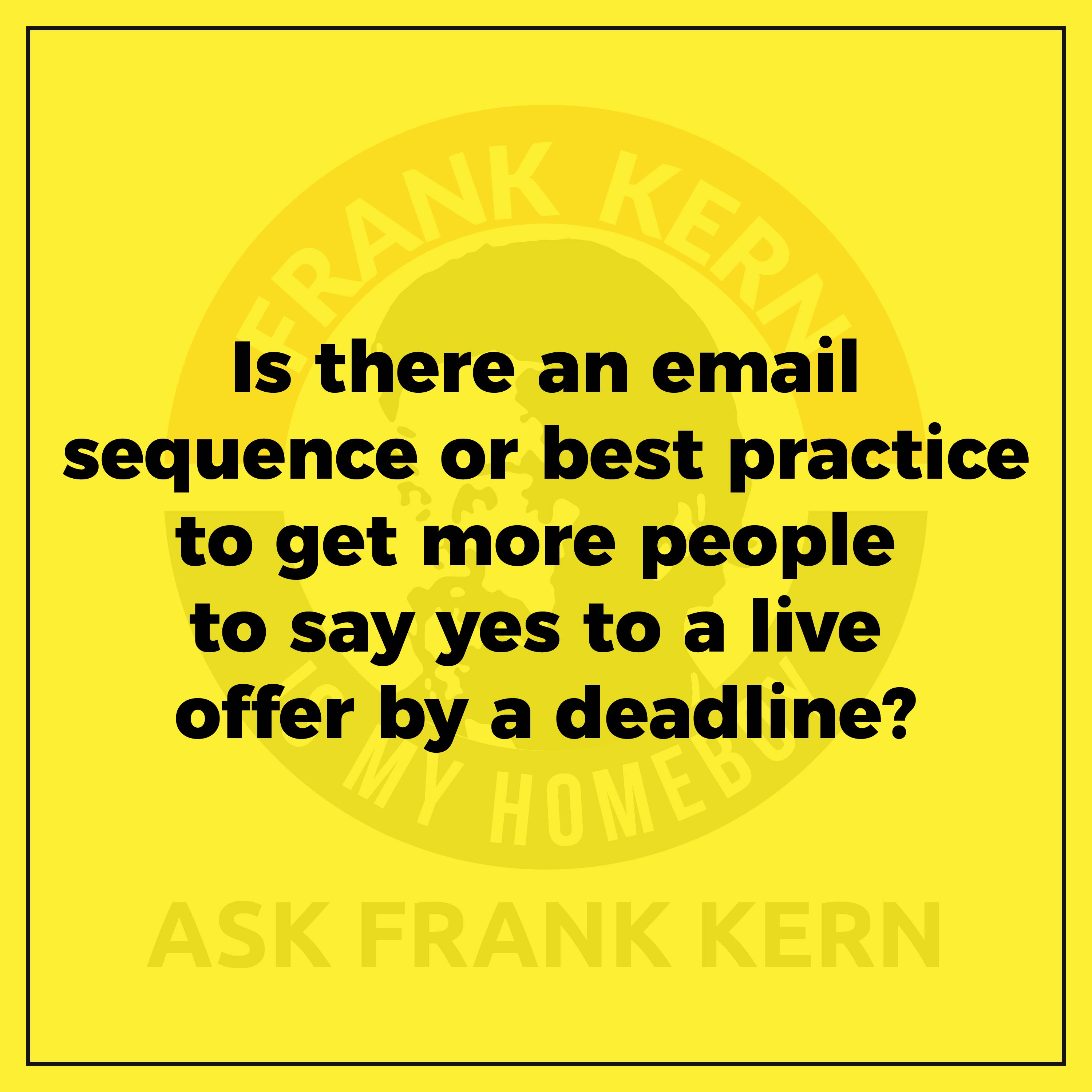 I have that program where it's basically a three month program 5k to a cold audience. I take them through a five day workshop and the people that don't buy within that 24 hour period, I do the expiring bonuses and all that stuff. Is there a mapped out...

So my question is like, I have that program where it's, it's basically a three month program 5k to a cold audience, and I take them through like a five day workshop on the people that don't buy,
like within that 24 hour period. And I do the expiring bonuses and all that stuff. Is there like a, kind of like a mapped out email sequence that you recommend or is there any other way to get them to more people to say yes, either in my live offer or through emails that you recommend? Just best practices.
Just kind of looking for like, you know, a strategy to kind of maximize what I'm already doing.

Yes, dude is called the bonus stack. Um, no, I'm sorry. It's called the deadline stack. So I like to take three deadlines and string them together. I didn't with this because of just, I kind of threw it together. It was like, well, let's just see what happens, but let's say you got something and it's a grant.
No, he's fine. He already said, so we use a five K thing. He got the five K thing closed on Tuesday, whatever 24 hours from now, I'm going to mute can just hear your background, but I'll bring you back on in a minute. Um, so you got a five day thing, 24 hour bonus enrollment closes in 24 hours. The end.
And then 24 hours comes and here it is, you know? And so now you're like, well, I'd still want to sell more stuff. So what you do is you go back and you say, you know what? I've decided to open enrollment again, because I want to like, it's your business, you know, and I'll tell you what I've decided to do is, um, the feedback was so overwhelmingly positive for this.

You guys have been so cool and I want to return the favor. I want to give you this cool bonus when you enroll. And this bonus is good until X time. And let's say it's another 24 hours. So that 24 hours passes that closes down. It really closes, you know, so the page they try to go to says expired. Wait a day, wait, two days, wait, however long you want to, then you come back and you're basically swear to God, like this is the whole attitude I was like, yeah.
You know what, what the hell? This has been awesome. I've loved it. Thank you guys so much. We'll ask them like, you know, they, they missed it for whatever reason. I don't know procrastination. Uh, but I'll tell you what, um, I kind, I'm feeling a little froggy. Here's what I decided to do for you. I'm going to open it back up again.
I'm still going to give everybody that bonus. I talked about last time, but I've decided to add another bonus too. So now you get this other bonus, by the way, if you've already enrolled, you can have it, of course come on. But I tell you I'm going to take it one step further because someone wrote me and they said that.
Uh, that they, they understand the value of the program, but the $5,000 was a little bit out of their reach and kind of offer a payment plan. And I said, you know what, why wouldn't I that's crazy. Of course I can. So here's what I'm going to do until the timer hits zero, blah, blah, blah. And dude, you could do that a million times, as long as you're not saying I'm never doing it again.
And you're not trying to come up with any like, you know, bullshit story. So the way to do it is to literally be like, I'm doing this. Because I want to sell more stuff and it's fun. And, um, it works, you know, so now you have multiple bites of the Apple, and now I'm going to try to unmute you if I can. It's just, we can hear you.
Okay. Awesome. That's awesome. Frank, thank you. Is it like, let's pretend you didn't buy it the first day and then you bought it the second day. Do I still give you the first day bonus?

Oh, yeah, everybody gets everything. It's a pain in the ass. You know, your job is to go and drink champagne constantly. Um, so you don't want to have to mess with who got what bonus, just like you can never go wrong.
Like, dude, surprise you get this to do. I really enjoy, you know, knows we get mad about that. So it's how you do it.