People like the audience searching. When looking to target parents with young children to help their childs' financial goals for the future, do you have any recommendations? 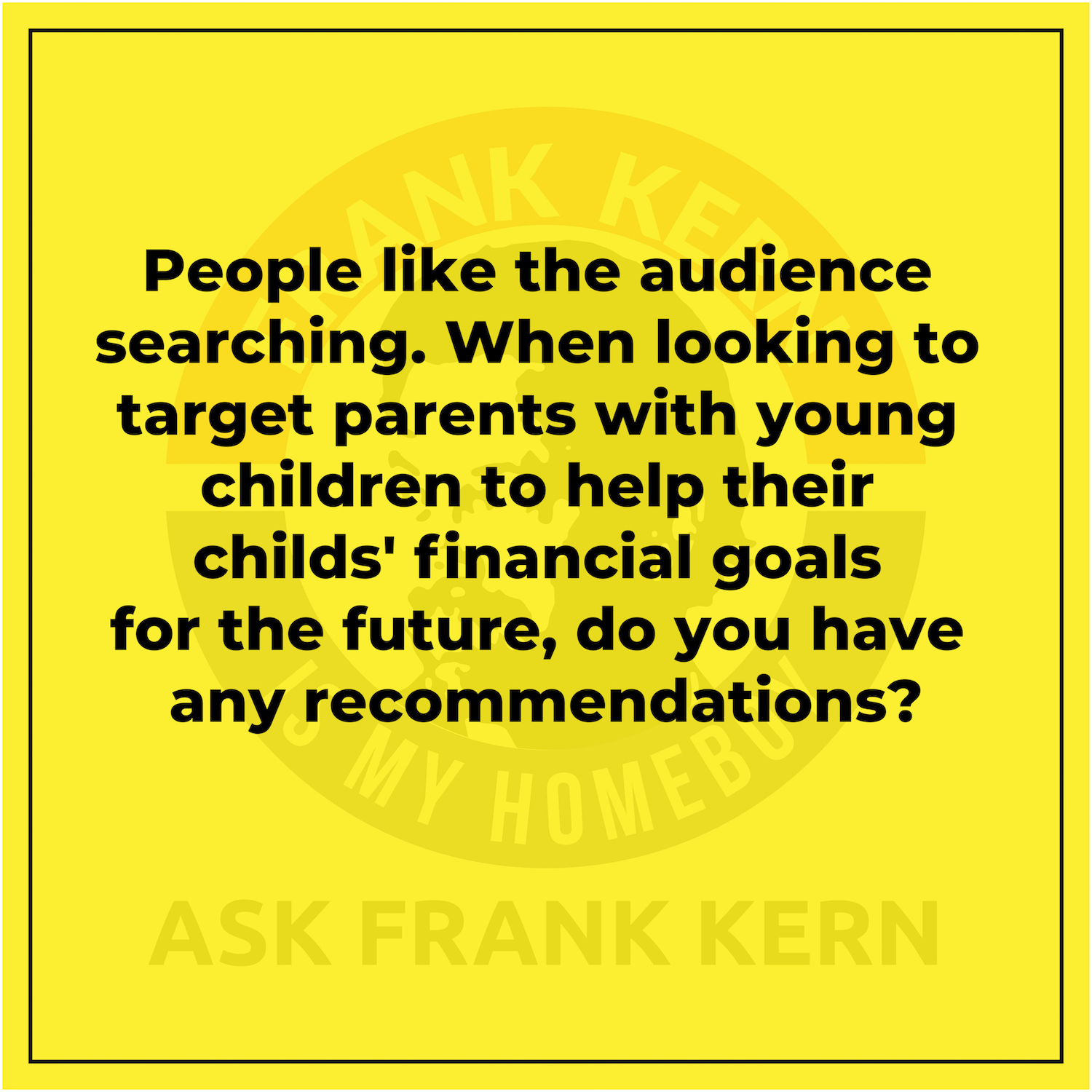 People like the audience searching, so can you help? He's looking to target parents with young children to help their child's financial goals for the future. Any recommendations?  I do, I do. I do stuff like this. Number one is going to be...

People like the audience searching. so can you help , he's looking for target looking to target parents with young children to help their child's financial goals for the future. Any recommendations? I do I do. I do stuff like this. Um, number one is going to be the copy, but you can give yourself a head start. All right. So, um, let's see here this one.
So let's just pretend we're at the ad set level, which we are all right. For whatever reason I chose in the specific location there a year. Um, Oh, that's that's. I was demonstrating how to do specific locations like I did the other day. All right. And there we go. Just to make this barrier, there we go. Okay.
And number one, who makes the decision? Is it the mom, dad? Both. Do you know if it's the mom? We would choose mom here, but right over here, we can do all kinds of cool stuff. Right? So. Number one, we can go to browse right here. And then is it demographics? Oh, Oh, parents look what, and then what age group are they?
Usually probably six to eight. Nine to 12, maybe 13 to 17 don't know. Right. So I would have an ad set for each of these. By the way. So each of those age groups would be one, right? And then I would take this or I do that as each of those. And then let's just say, we do the same process for each one of those age groups.
All right. Now let's go. Um, what was it? Three to five that might be too young, but I have no idea, you know, I mean, I've got kids, but my parenting is like, Hey, get your own cigarettes. You know? Um, so, and I think I do a good job of that. So I got nothing in terms of like how to actually do that stuff, but let's go to now narrow audience and good.
And let's say, all right, we're showing it to, you know, mom or dad or whoever. They're probably interested in stuff like investing probably helps me spell it. Right. Maybe I don't know. Or go investment. Right? And so now we've got a good zillion, different ad sets that we could segment out to parents of children between those ages.
And so I would literally have an ad set that's investment investing, like every single one of these. I do an ad set for, you know, and then. Same with a different age group and then same with another age group. And some of them are going to be great and some of are going to be terrible. And it's usually the ones you're like, this is a no brainer.
Those are the ones that are terrible. And the ones who are like, shit, I don't know. Maybe those are the ones that turn out great. There's rarely any rhyme or reason to it that I've found, except for I'm usually wrong in the ones I think that are going to work. That's why throw a bunch of stuff at the wall, see what sticks and that's how you do it.