Should I make my challenge funnel more general to cater to all interests, or should I tweak the challenge and make it only about one specific niche? - Frank Kern Greatest Hit 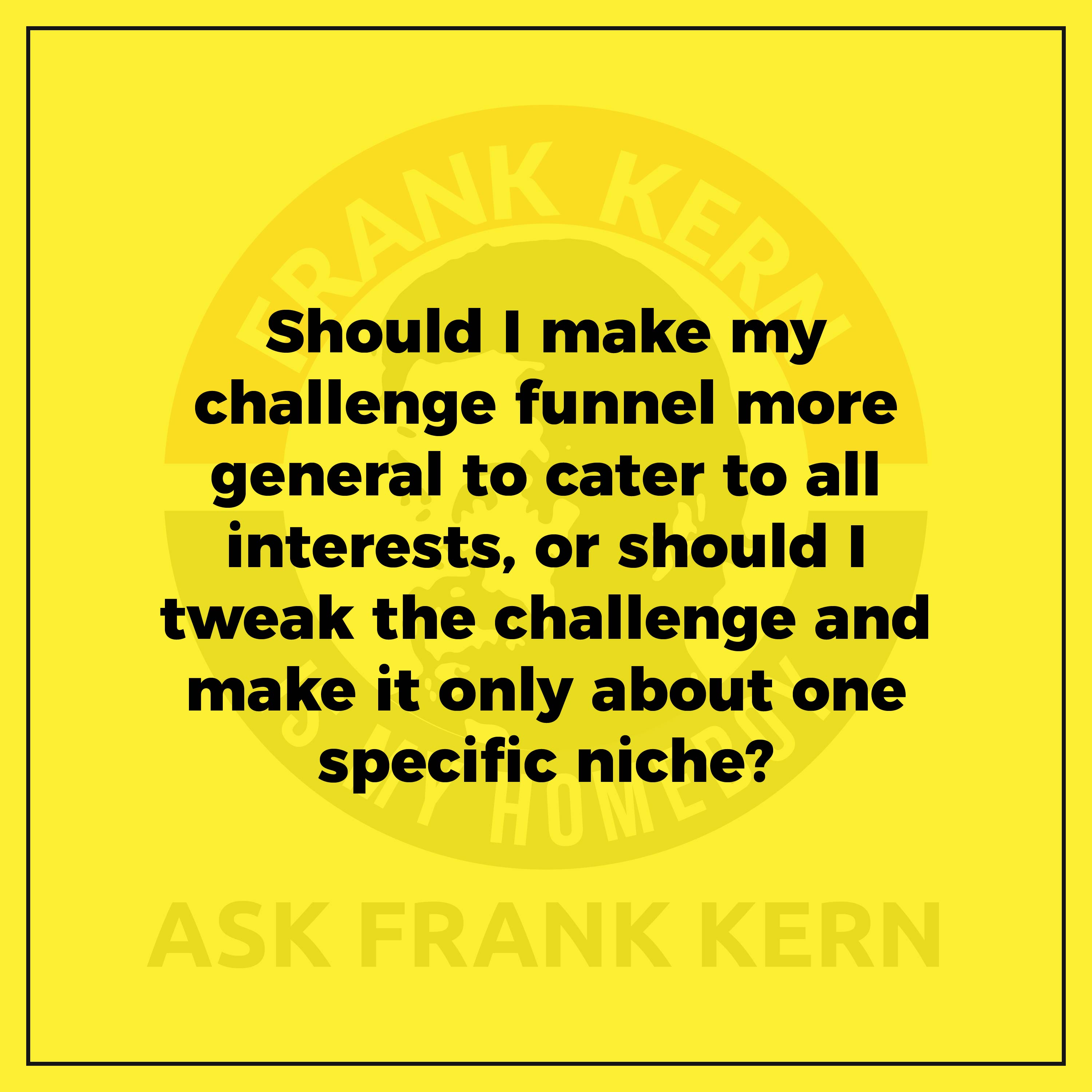 I'm wondering, should I make my challenge more general to cater to all interests? So I have people that are coming into this challenge that are probably interested in cosmetics or outdoors or beauty...or should I tweak the challenge and make it only...

I'm wondering, should I make my challenge like more general to kind of cater to all interests?
So I have people that are coming into this challenge that are probably, you know, interested in cosmetics or outdoors or beauty, or should I kind of tweak the challenge and make it right. Only about like one specific niche and then just pretty much kill all the interest and just only go after like cosmetic, not cosmetics, but cause I don't know anything about that industry to really talk about it. Um, but like gaming or fitness or outdoors or cooking. Um, I was just curious what your thoughts would be on that. I would let the data tell you, um, cause at the end of the day, the pitch is give me some money and I'll show you how to be an affiliate for stuff. Right. So I'm guessing. Is that right? Um, well the challenge, it is a paid challenge, but like during the challenge, um, it's, I'm going to offer him a trial to get into my, uh, social network that I built.
And then I'm going to talk about the benefits and how it kind of goes with the challenge and it'll help you after the challenge. Um, so kind of, so you're yeah. I mean, cause you're teaching them how to be an affiliate for stuff, right? Yeah. So the first round of this might be iffy second round, probably not.
So let's say you're testing like 50 audiences or whatever, and you ultimately find that you got fitness cosmetics. Say like cooking, then we'll do one more, um, gaming and those are the, for whatever reason, it's like, these are the folks who are responding. Right. What I would do is then on your second one, I would go longer in these and I would make your pitch page.
Give examples of here's, how it works with fitness. Here's how it works with cooking. Here's how it works with cosmetics. Here's how it works with gaming. Uh, so you're like hitting each one of those individual guys in the pitch, you know, for example, there's all types of ways you can do it. Uh, did you know that if, if, you know, for example, you're interested in cosmetics, There are cosmetic companies that will pay you to talk about them on social media, whatever you do in there.
And then in the challenge itself, I would be using these niches as, uh, my demonstration points and, you know, helping them set up accounts for affiliate stuff in those verticals, if that's what you're doing. And I would also use it in your pitch. So as a classic example of miser method, giving you market data to validate, like where you're most interested.
People are then helping you craft your messaging around it. Where is it? We're not really gonna know. Cause it's like, you're getting the, you're getting the leads on the flies. It's like, well, hell but second time you will. Yeah, that's perfect. I know. I never even thought about positioning it like that. So, um, that's exactly what I'll do.
Thanks so much.
I got you, man.