What do you recommend for the in-between time? They publish their ads, what should they be doing for the next three days while they're waiting? - Frank Kern Greatest Hit 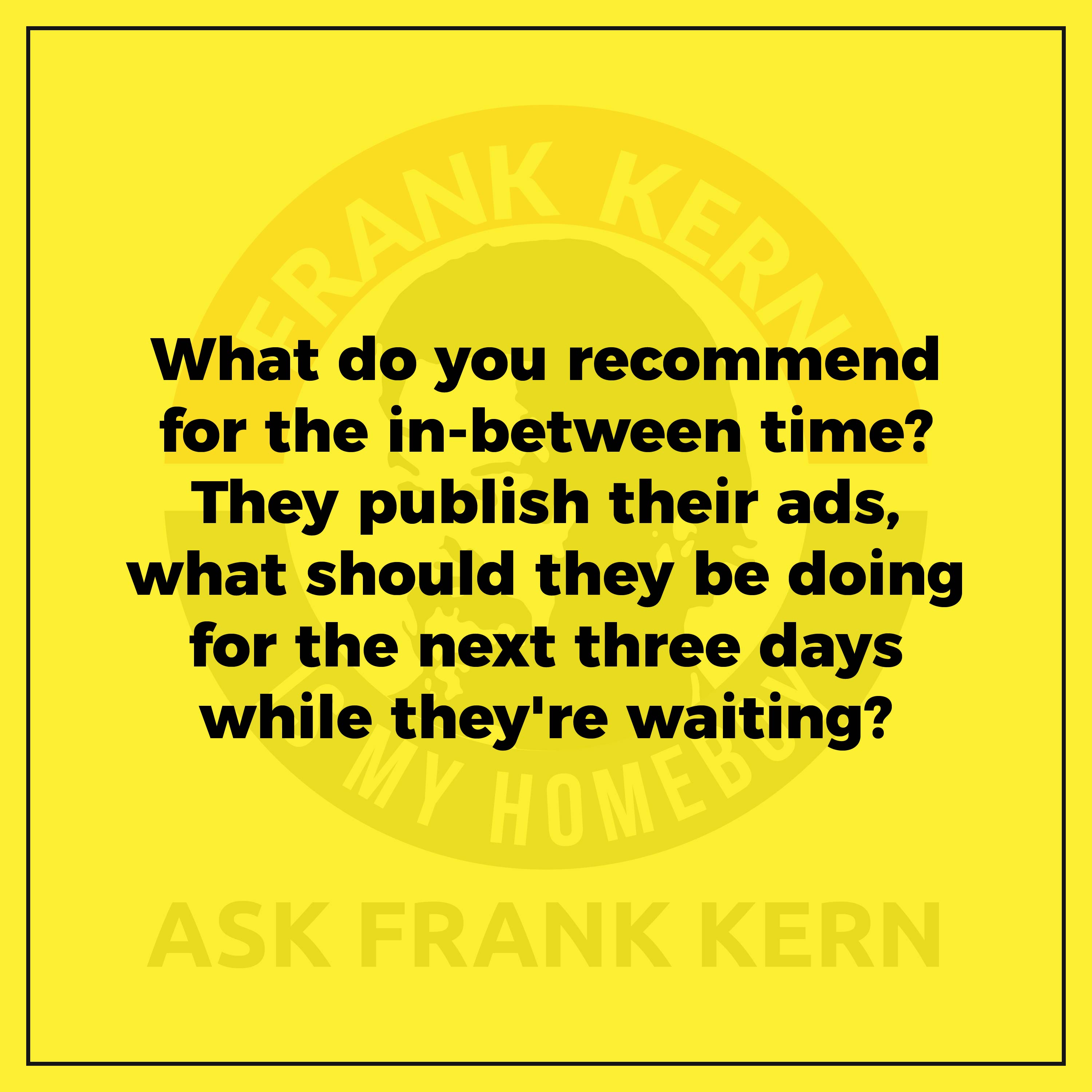 A lot of people are curious about the in-between...they publish their ads, what should they be doing for the next three days? Just while they're waiting for the ads?  Any recommendations?

A lot of people are curious about in between they publish their ads. What should they be doing for the next three days? Um, just while they're waiting for the ads, any recommendations. Yeah, well, first we're going to make another one on a Monday, you know, so this was just a leader. Like we ain't done now.

We're going to make a conversion ads, which is ads that go to a webpage that try to get somebody to do something. So we have that world. And then our next step after that is why we did this on Friday, by the way. So we'd have the whole weekend for everything to get approved and some data to come in. Our next step is cutting in and scaling.
Where we will prune out the bad ones and then scale up the good ones. And other than that, there's all in your after click stuff you want to focus on, you know, so if you're, um, let's see, I'll do a new stop share. Yeah. And do a new share. Right. Some people are so good at zoom and just effortlessly do it.
This is the whiteboard thing you show him. Does it take up the whole screen or just show a little bit in the rest of my screens there? I'm not sure. It looks like it's just fitting to the window for me. Cool. All right. So the after click stuff, which you can be working on is let's say, you know, you drew out your sales process and this ad.
Um, VSL and you're using the classic, right? Well, you need to be asking, okay. What happens if they don't buy? Right. And so imagine that's a big red X, I just don't want to take forever to change the. Color on here also. Now you gotta have like some kind of, Hey, go buy the damn thing sequence, right. So you could be looking at okay.
You know, looking at where all your leaks could be. Um, what if they never clicked the VSL? Right. So what if you got an email sequence here and they never click it or they do click. Yeah. And they don't buy what's your next. So a good thing to be thinking of. And what I like to do is I like to stack sequences.
And so you want to think about where all the holes are in your funnel and what you can do to plug those holes and what types of sequences you can add to make everything work better. Cause that's really where the money is. Like I looked at the drawings and some of you guys have really elaborate ones and some of them were really basic.
And the basic ones, a lot of times work like, you know, ours was this right. And if they didn't buy. They got countdown sequence also known as a deadline sequence. And that was it. And that's what made this classwork. So it wasn't anything too complicated. Um, but that's what I would be thinking of during the interim, while you're waiting on stuff to get approved and waiting on data to get, get to you.
So, you know, which ads are working.