What types of lead magnets work best to attract higher-level prospects for our agency side? 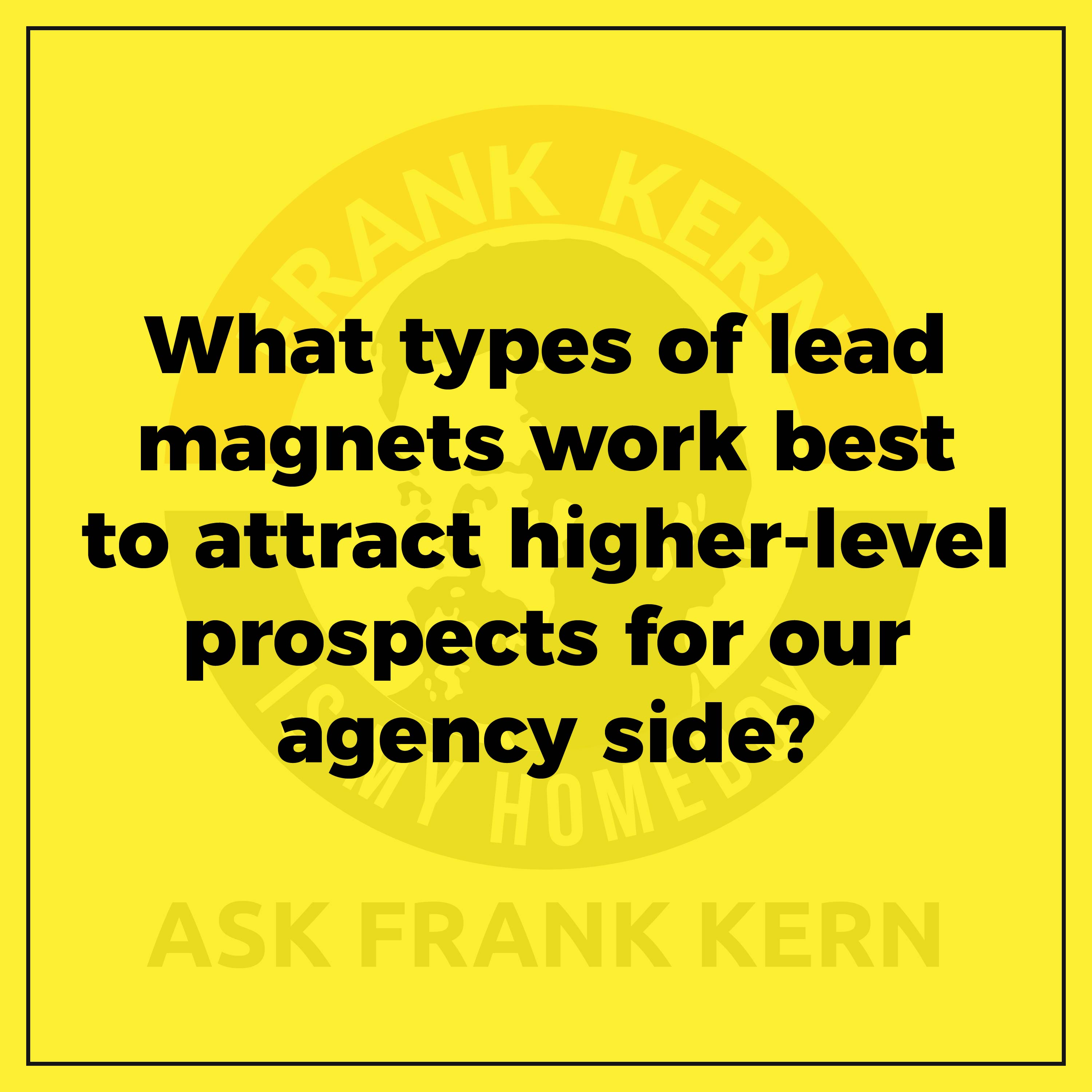 So we're going to move those people to pitch our membership group, but we want to create a new lead magnet, similar to your idea of elite owner operator. But it's specifically for real estate agents who make $500K or our number is more like 300 and...

We have a campaign starting out that I built with Nick, that was just like a listing ad template works for, like, I get a dollar leads from it, like consistently works every time, but we found is that it wasn't right now leading to people who can like afford the agency side. So we're going to move those people to pitch our membership group. But we want to create a new lead magnet, like similar to like your idea with the owner operator. But it's specifically for like real estate agents who make 500 K or our number is more like 300 and up. Um, but we'll take the lead magnets you find work better for attracting that type. Or do you go straight to like hire us to do it for you? So you're essentially what you have are two different offers. I'm trying to make sure I understand that the question one offer is for people who were making it a bunch of money and you do stuff for them. And then if you're not making a bunch of money, you can buy a membership. Is that right? Okay.

So the simpler and more streamlined way to do it is to offer the same lead magnet to everybody. Cause they all just want to sell more property, get more listings, et cetera. And then through that in process, gauge the revenue by asking them how many transactions they currently do per year or per month, and then segment the sequence based on those actions. And you can even do it in Facebook, lead ads. You know, you can ask a question and Facebook lead ads that we do. We've got a PDF lead ad thing, and it's like how to sell stuff on social media. One of the questions is, do you currently advertise on social media? Of course we do nothing with the data, but we get it. And it's real simple within like active campaign Infusionsoft, whatever to segment them based on what they give in that, uh, in that answer. Can, do you like redirect to like a specific than offer on the thank you page or with like a lead ad? I guess it can't change the secondary part of a lead I'd based on answers, but yeah. And nor would I want to, because I don't expect them. To consume content very well straight from that social environment, you know? So the guy's coming off of Facebook. He's optative I don't expect them to actually read the thing that they got right then. So I want to send them to a generic page. It's like check your email. And then I put them in an email sequences checking to see if they got the lead magnet, if they ever clicked and downloaded it. And then all of the behavioral stuff I mentioned would go after that. You know, it's like, okay, there's three days, go get the damn PDF. They get the PDF check to see if they bought the thing that the PDF and sell. If not put them in a pitch sequence for the thing the PDF is saying, if they click on it, put them in a countdown sequence for it. If they don't click on it, put them into another offer, et cetera.

So I want to be able to track all of that behavior. So that's why I don't put them into any specialized thank you page. Cause like, so for like trying to get the whales out of that, Do you find that there's a specific word? They go because I'm, we're talking to a lot of the team leaders. They're like, I don't even want to buy the membership. I have no desire to learn to do it myself. Like that's always the feedback we get is they're like, I don't care about learning. I do it. I just want someone to do it for me, which is why I didn't buy our membership. So that's why we were trying to like separate them into two different streams. Yeah. So it would be the, how many transactions do you do a year? You know, so the ones who do one transaction a year, even if they want someone to do it for them, they probably can't afford it. So there's no point in going through the, that offer with them. And if they do, uh, you know, let's say it's 35 transactions a year as the indicator, that they're a good prospect for the done for you service. That's the offer you put them in and then if they don't want it, you offer them the education.