What was the SINGLE biggest obstacle overcame to get where you are today? - Frank Kern Greatest Hit 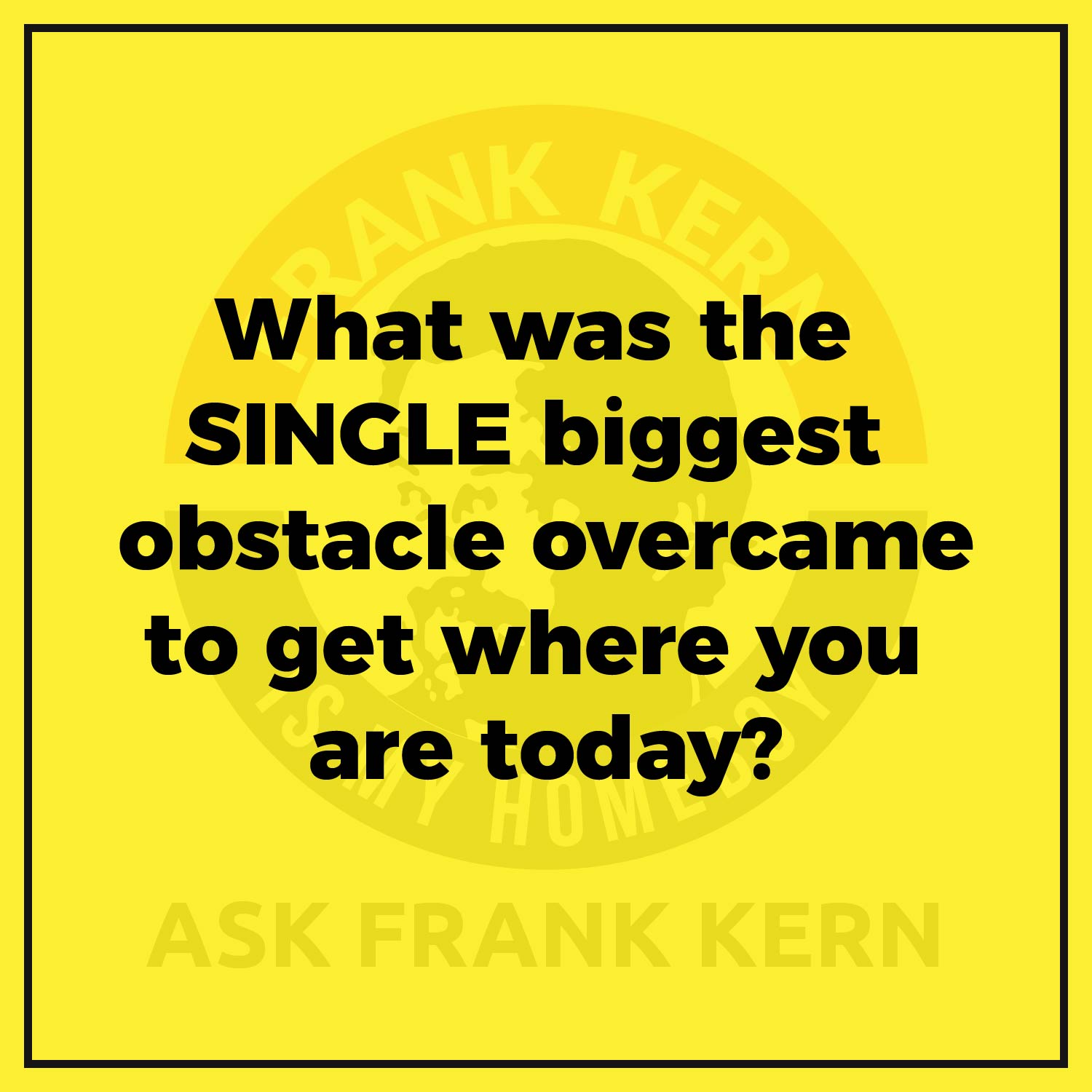 What was the single biggest obstacle I overcame to get where I am today? That's a serious question. There are a lot of them, so I'll just tell you all the dumb stuff that I do. And then I'll let you decide what the biggest obstacle is.

What was the single biggest obstacle I overcame to get where I am today?

I don't know. I mean, that's a serious question. There are a lot of them. So I'll just tell you all the dumb stuff that I do. And then we, you know, I'll let you decide what the biggest obstacle is. So here, dumb things that I have done and continue to do. Number one is lose focus. It's funny. I just got an email from a really good copywriter named Stephan.

I can never remember the guy's last name. He's really good. Created something called the RM BC method, which I recommend for copy. It's really cool. Anyway, email to his list broadcast. And it was about, um, focus then, you know, should you do a lot of businesses or just one? So I think one of the things that's cost me the most money, uh, hands down.

Is losing focus on doing the thing that works. If you were to say like, okay, what single thing would you tell somebody like, you know, you're dying words or whatever in marketing, um, it might literally be if you got something, this working. Keep doing it and don't get distracted and do something else. Um, I have lost so much money through distraction that I literally have 80 20 for the parade, old principal tattooed on my wrist, um, and is tattooed on my left wrist because that's the wrist that I write with.

So it's really easy to get tired of your own stuff, you know, and your own promotions and talking about the same thing or whatever. And, um, one day I was watching, I don't know, whatever. On TV or YouTube or something. I saw Aerosmith and they were playing walk this way. And it was like present day or close enough, you know, it was in the last couple of years and it's Aerosmith plan walk this way live.

And I was like, Man, those dudes have been playing that song, man. God, you know what, 30 years maybe longer, I don't know math. Isn't an exact science. And I was like, you know, they're sick to death to play plan that damn thing. But you know what they're probably not sick of is cashing the checks. They're probably not tired of cashing those checks.

I need to comb my hair. I need to get a haircut. The lighting's bad. I looked terrible. Yeah. Blah, blah, blah, blah, blah. That kind of stuff. You might as well, just be writing a blank check to later, you know, so I've done that. Still continue to do it. Despite evidence, incidentally, that for me personally, video ads, even when they're shown to strangers, When I look absolutely horrible, like worse than normal, like right out of bed, you know, four 30 in the morning going, Hey, it's four 30 in the morning.

I know terrible, but here's why I'm making this video for you. That converts better than looking good. Anyway. So there's a, there's also that and the final one would be. Short term thinking, not looking at stuff over like a five to 10 year play. And instead of looking at like, okay, I put, you know, I spent a grand on ads today and I only made 900 back.

I'm going to stop running the ads. You know, that's really, really, really costly because it doesn't take into account like the longterm benefit of having that customer and the lifetime value and blah, blah, blah. That was a good question. Thank you for that.