What would you say to the individual that has all the content in the world but is having trouble implementing it? 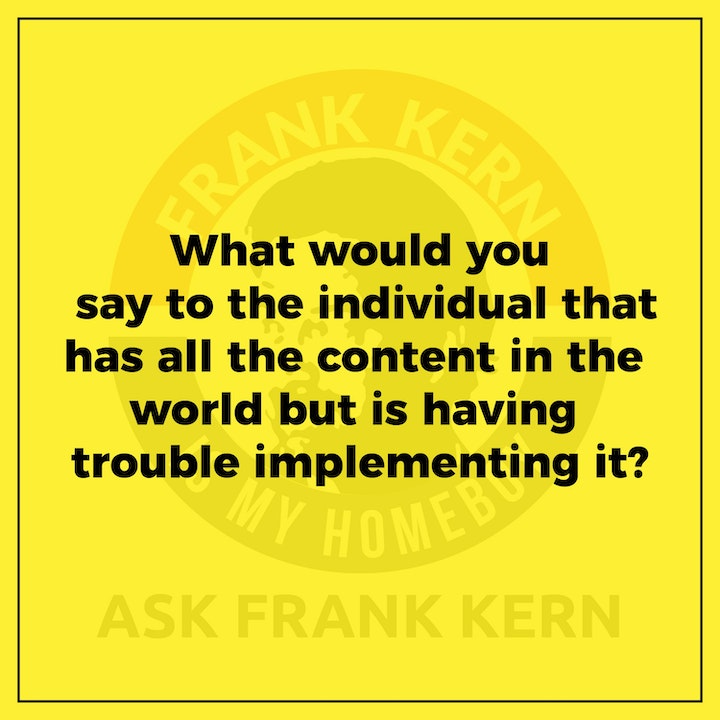 The hard part is the implementation aspect or the over analysis of like, oh God, I know I should do this. Should I change the color of the button purple and all this other stuff or, to some of these points, I hear a general sentiment of I kinda know...

What would you say to the individual who has all the content in the world? They've probably stacked up digital dust and all these like digital libraries that they have. And the hard part is the implementation aspect or the overanalysis of like, oh God, I know I should do this. Should I change the color of the button purple and all this other stuff or, to some of these points, I hear a general sentiment of I kinda know what I need to do, I've heard it before, I'm just having trouble pulling the trigger. How would you address someone who's in that specific situation?

Well, you've got to first understand what's predicating that situation of like procrastination and not getting things done and all that stuff. And it's going to be one of two things. It's going to be overwhelm where they just don't know what to do, because they're getting so much information. It's actually going to be one of three things. Uh, there's going to be that there's going to be, they don't want to because they really don't quite know how to do it. And it's a hassle or it's going to be fear. Which is what if I try this and it doesn't work and I lose money, you know? So, and I think ultimately the, the last one is the one that's the holdup, because they're, they're going to be two types of fear, which is what if I try it and it doesn't work. And now this thing that I've built up in my mind is like the great freer from all bad stuff in my life. What if it doesn't work? There's that fear. And then there's the other fear, which is okay, what if I run this ad and I lose money on it, their stuff, and the best way to get over that and stuff is understand that it, it almost is never going to work the first time, you know, so you just have to be okay with it and realize that all you're doing in the beginning is you're getting data. And so instead of writing checks for courses that give you hypotheticals based on a limited degree, or maybe a lot of experience from one individual or collective of individuals, instead of just do stuff. To get real world feedback from which you can now make informed decisions.

So I always like position at beginning ad campaigns and things like that. As you're just writing a check to this imaginary consultant, that's going to say, okay, for $2,000 of ad spend. What I'm going to tell you is what market responds to your ad and what ad they respond to the most and what landing page converts the best. And that's what that 2000 is going to give you. But if you look at it that way, it's like, well, hell, that would be a pretty good proposition. If you just write someone a check and they would tell you that. And so it's a, this really a mental shift.

The other part is that I think a lot of courses and digital material is not consumed. And I think the cure to that is to participate in programs like yours and like mine, where you're actually talking to people because as much as we want there to be one size fits all solution. For stuff in many cases, there's not, you know, and, um, it's especially true in like Facebook. Yeah. Yeah. As you know, and I know you run a lot of ads, I run a lot, I'm doing my own and I just tested this one methodology that, uh, Hmm. We're studying this guy that used to work at Facebook and he's got this really interesting things like, okay, you just have to campaign bigger budget, let the pixel figure it out. And so I did that all of June, it's probably 100 something grand and it worked okay. Then it made less ROI than I normally make with my add a whole bunch of little ad groups and like miser methody stuff. Whereas a friend of mine did the exact same method and he's crushing it. And I'm like, what the hell was that? And so what it indicates is like you really have to throw experience and real time feedback into the mix in order to really get. What you're looking for. And I think people understand that the digital core stuff, they're like, well, I have all these questions and I don't know. And does it apply to me? And so you should, Hey, just throw shit against the wall and see what sticks and, you know, get your answer that way and be the better solutions, not necessarily courses and getting them into a environment where you can talk to somebody.