You understand human behavior, positioning and dynamics. How do unconscious marketing elements like context, environment and positioning affect the marketing schtick? 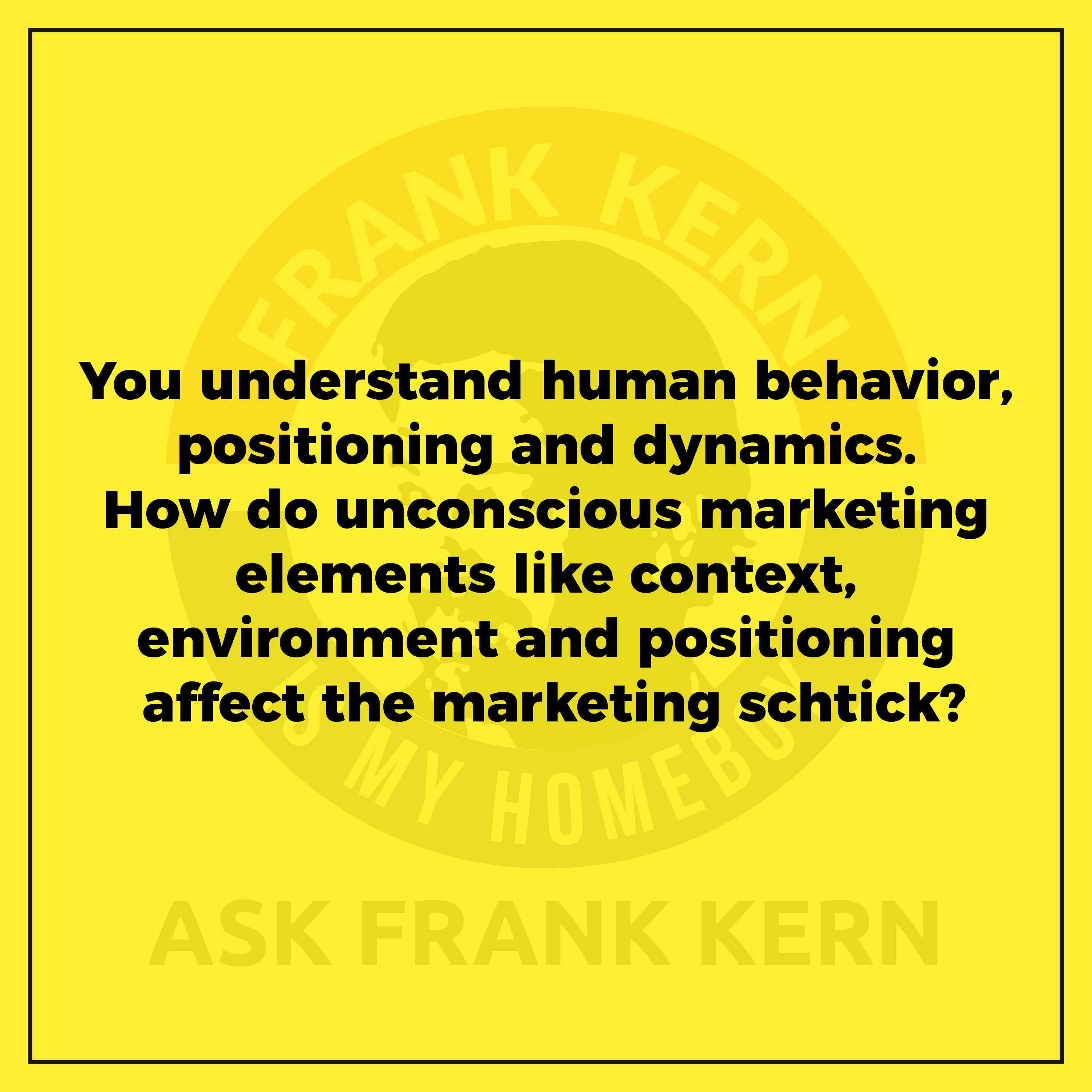 One thing I've really appreciated about you over the years has been obviously, you know, you're one of the most intelligent marketers out there, but something about understanding human behavior, positioning and dynamics. So for example, however many...

One thing I've really appreciated about you over the years has been obviously, you know, you're one of the most intelligent marketers out there, but something about understanding human behavior, positioning and dynamics. So for example, however many years ago, maybe you remember what year it was, you did like the first state of the internet address. You did it, maybe in an office that looked pretty fancified, you sit at the big desk and what people didn't realize, and I know you explained this later in time, but what people didn't realize was there was obviously the marketing message that happened, but then there was the subconscious marketing message that happened where when you position yourself as the president of the internet, and you do a state of the internet address, automatically that changes the positioning, how people see you, obviously. In the world and, and in the, in the interwebs, uh, particularly in the internet marketing space and then, I didn't even catch this until recently, but a lot of your recent ads currently are this positioning of, Hey, if I had to say, start over with nothing more than a laptop and an idea and that sort of position, here's what I would do. And at first I always was thinking, why is, why is Frank kind of taken that angle to the marketplace until I was having a conversation with my jujitsu, the instructor who happens to be a long time follower of yours. And he said, you know what, Frank just nailed me. And I wanted to buy everything. He, he. He offered because he was a jujitsu instructor. He obviously had a jujitsu gym covert happened, which just so happened to be the same time you were running those ads to this day. And he was like, you know what? I feel like I have to start over with nothing more than, than a laptop. So the languaging was so nailed in and I didn't actually catch onto that until after the fact that I'm, I'm going to, I was going to ask you, was that intentional? I'm going to assume it was intentional in the time it was released and who you're releasing it to, but maybe you could speak to that just a little bit, because I think what some people don't. Factor in into the whole marketing thing is yes, there's good direct response marketing that puts influential copy in front of somebody and gets them to respond a certain way. But there's also the unconscious marketing, right?

You speak a lot about content and environment. You speak about positioning and there's all that that actually carries some, some weight. To the whole message. So, uh, can you speak just even a little bit to, what was your thought pattern? Even if we go back to the, the state of the marketing address all the way to now, if I were to start over with nothing but a laptop and then maybe some ideas around environment context and all that, and how that affects the whole, the whole marketing shtick. Sure. Yeah. So first state of the internet was I think, 2009 or something that whole Europe is really hazy. It was like back in the day. But, um, it, it, I did it because I realized that the internet marketing community was a real thing. So I started with 99 and the evolution of our universe has been like pretty meteoric. And it's back then. It was nothing like it grew into now. Yeah. So it used to be like, you know, 50 people or something that kind of came out the direct mail world and direct response world. And we're literally saying things like the internet, it's just like direct mail, but without the mail. And then it started growing and growing and growing, and I wanted to foster that sense of community and just really propagate Goodwill. Between launches. So with very poorly thought out and the very first one wasn't in front of the fancy desk, it was at this other place and it was raining and stuff. And I was like, all right, I'm just going to foster some Goodwill between launches and, you know, keep, build up a sense of community because I was very proud of, of what the internet marketing space had grown into and just wanted to do some good work, however, That was received very well. Then, then the one that you're remembering, which was at the fancy desk was very, very thought out. And, um, that was my way of deliberately trying to position my own personal brand away from being. Just another internet marketing, like elevate that brand. And so at that stage, in my career, I had shifted from the selling, you know, your typical info courses to going a little bit more high ticket and a little bit more consultated. So I wanted that implicit branding to go along with it. And I just thought state of the internet address sounded cool. You know, I didn't actually have enough pretentiousness to be like, I'm going to. Declare myself, the president of the internet, but it kind of worked, which was great, you know? So. I take it. And, um, and so that was very much by design. I haven't done any more in years out of laziness is really a horrible mistake on my part to not keep doing those. I just really don't feel like it. And so not a very good excuse can I say, and I don't feel like exercising, you know, you should still probably exercise there wouldn't be an old fat, but, um, that's why I haven't done them. So to the, if I had to start all over thing, there's a couple of. Deeper levels of that.

The first one that needs to be acknowledged is I totally stole it from Billy Jean Shaw with his permission. I was talking to him and I was like, dude, that's a great promo. How's it doing? It's like, he was like, man, that's doing great. And I was like, Cause they don't want to try a similar promo from a similar angle. Now, our content that we're teaching is dramatically different. The show when people had to start like a little mini agency and I'm literally like wanting to make my life miserable. So I've let people look over my shoulder. As I built a completely new brand selling skincare, and I can't even be the face of it. Um, but you know, that first angle was just. Being very proactive in a marketplace going, this is an offer that's working. I think I'm going to see it. I can utilize that same messaging. And so it was obvious that COVID was happening. And then a lot of people were in that business, but normally I wouldn't do that because that's, what's considered minnow bait. So Maine, which is a lower ticket offer this generally going after people. Well, I'm not intentionally going after people, but that if I had to start all over thing would typically be targeting people who don't have businesses. So my intent behind it was to target exactly who I got. And the example you gave, which was your jujitsu instructor, people who do have businesses. But want to pivot to digital because I believe even when all this mess is over, you know, we've all gotten kind of used to digital and was like, Hey, this is pretty good. Right. I think we're going to do more digital. So it was a, it was a very deliberate widening of my net to get, you know, the, the unavoidable raw beginners who are welcomed, but not necessarily good long term customers, but also folks just like the business owner you described. And the reason I did that is because. As everybody listening would agree. Digital is moving so fast. Now, if there were, and by that, I mean, the world is doing more digital stuff, content consumption, transactional stuff, people who normally wouldn't. Do things online now are, and when this is over, then we'll continue. And that means that a greater percentage of businesses will be open to doing it. And I want to be their first kiss, so to speak, you know, so that whole program for a hundred bucks is really me spending 30 days with these guys. Delivering value to them. So I'll have them forever. So when they decide to, you know, build an ad campaign or whatever, or take it really, really seriously, they'll stay with me, they'll join continuity and that'll you know, continue that relationship.