Do you have any tips on how I can engage a beta group that is testing my product to extract the most valid information? - Frank Kern Greatest Hit 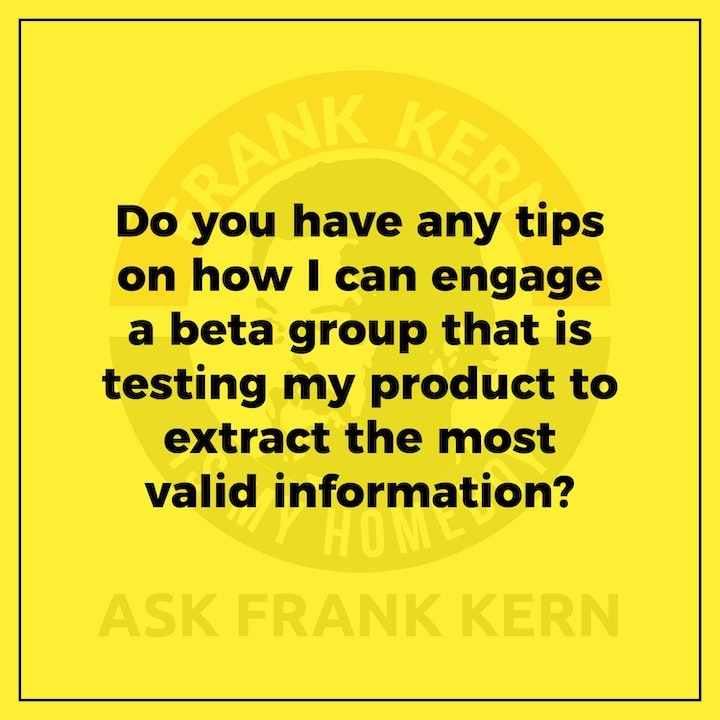 I'm trying to find out if you have any tips on how I can engage this beta group and extract as much information as possible so I can really hone in on that viable, what that minimum viable product is. I don't know if I would...how big is the beta...

Hey, Frank, how's it going? Here in Ottawa, Canada. And, I'm actually a software entrepreneur. I'm building a book, customized book software right now and helps parents build books and overlay really cool graphics so the kids can learn what we want them to learn, but it has a cool factor of a comic book. Right. And so I have a YouTube channel that's being launched with our teacher, our VP academics is a teacher. She's going to go over books and teach people how to use the same children's book, three different ways with different types of questions. I have a podcast which is my other partner. He's interviewing teachers who are academics, or even parents who have really cool hacks and teaching them how to enjoy reading books and cutting with kids through books. And then I have this beta group of about 30 parents who have kids under five, cuz I learned that parents with kids under five, and I have my kids are 8, 14 and 17 now, so I remember when they were under five, I spent a lot of money on them. Right. And so I'm curious, the beta group is meant to validate my product. I'm just trying to do more product validation to get a better minimum viable product while I use the social media, YouTube and podcasts to build my audience so by the time my product is done, I can just sell into the audience. Right. So I know it's not like, I don't know if it is considered direct response, but I'm trying to find out if you have any tips on how I can engage this beta group and extract as much information as possible so I can really hone in on that viable, what that minimum viable product is.

I don't know if I would, how big is the beta group? Uh, so there's 30 families now, so 60 individuals. Yeah. I don't think that they can give you enough data to really be statistically relevant in the grand scheme of things. So if it were me and keep in mind, I'm like, Caveman bludgeoned approach to a lot of stuff because only have seven functioning brain cells and five of them typically aren't working at all times. So I would just be like, all right, I think this is pretty good. I'm going to try to sell it and then see what happens. And so with the customers, ah, I wouldn't change this then. If you get enough requests like that, he might change it, but nothing is really going to give you data, like actual advertising feedback from real buyers. Right. And so if you were to be like, okay, Frank, I'm going on sabbatical for 10 years and you have to run this business. And then I couldn't talk my way out of it. Um, that's what I would do. I just start running, running ads and see what worked and then sell the thing that you get. Not that you think they're going to like it. If they like it, then. Don't mess with it. And if they like it pretty good, then don't mess with it. And if they are really, really dated, then mess with it, you know, and that's, that's what I will do. Cause otherwise you're, you're going to be stuck in research mode forever. Right. Okay. So is there a way to sell my product is like, not even, it's probably like 30% along the way in terms of development, is there a way that you've seen where we run ads to get information? Is it like. You know, um, kind of a, an ebook or something. I know nick milky books. Right. But, you know, is there ways to extract market information so I can actually develop a product, uh, you know, more specifically to consumer demands and needs or things like that. I wouldn't, I don't know. I mean, back in the direct mail days, there was something called dry tests, which I really don't recommend you do it. I don't think it's legal. Uh, where you would like put up an order form and then take the money and then immediately refund and be like, Oh, we're out of stock, but you're just doing it to see if people will buy, you know, and I would not again, recommend doing that, um, outside of that, which again, to be a hundred percent clear, don't do that. Uh, I would look and see if other people are selling anything similar. And then just make something that's better than that, or at least has the same feature set. And if there is nobody on the planet selling anything similar, it might be an indicator that, Oh, you know, there might not be any demand for this thing. Right? Well, there are definitely competitors, um, done very differently. Of course, I think we found, I believe we found something different and, and meeting a different need. That's not even there yet. So, um, I'm just really trying to figure how to test it. How. How wide this market space actually looks like. So if you want it to, so was someone who actually, most of the law about this, you could build a sales page where the two step order form. And so step one is name, email address, and phone number. And then they would enter that thinking they're going to a credit card form, and then you would maybe have it say, Hey, you know, we're temporarily accepting orders as we do development. And then that would at least give you an idea of, so it's attempting to order right? I still think that's a little bit gray area though, but you know, you wouldn't know for sure, but if there's no product in the world like this, um, it would give me pause, you know, so I would just be like, I'm going to develop the barest bones thing possible. And even if everybody hates it, you know, I guess maybe sounded like 20 or 30 of them and see what happens just to get that data back. And if they all hate it and give them back their money or whatever, and just consider that development research costs. That's real and not a focus group of people who are now potentially biased to agree with you, or potentially buy a set of reciprocity to give you data that might not be real. Cool. Awesome. Thank you.