How do you get past the Facebook regulations and still make an emotional offer? 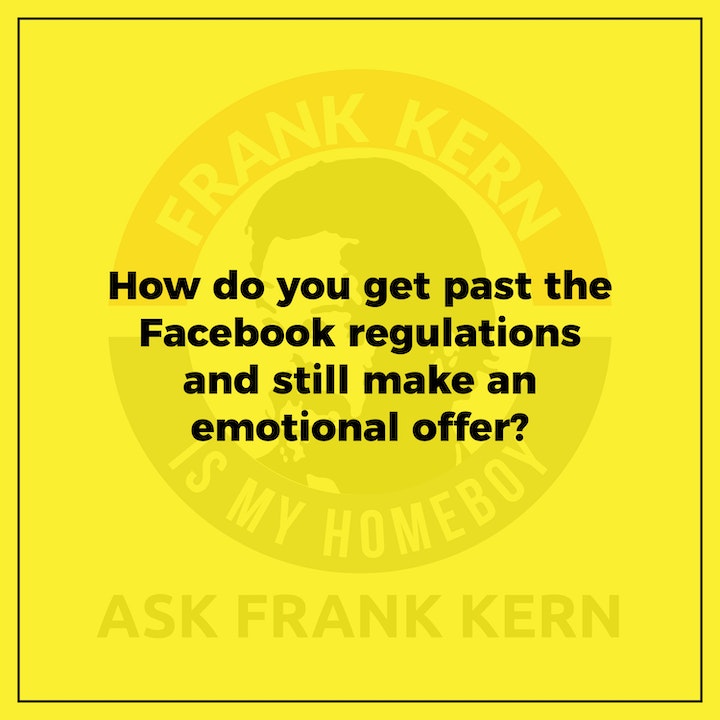 If there was a quick tip that you would give people about the promise or about making the offer, or whether they need to twist the pain, and in particular, how you get past the Facebook regulations and still make an emotional offer because that always...

Ask Frank Kern
Transcript
If there was a quick kind of tip that you would give people about the promise or about making the offer, or where does I need to twist the pain or, uh, and in particular, how you get past the Facebook regulations and still making an emotional offer.
Because that always seems to gain the way, you know, for a lot of things. Yeah. So I'm really glad that you brought that up. Um, maybe I guess my second biggest influence and what I do for a living, which is advertising as David Ogilvy with my biggest influence being Dan Kennedy, an Ogilvy, never did that stuff.
He never did emotional pain, twisting, you know, people who Harold, like the rolls Royce had is the greatest Adam history. It's a list of 13 factual statements about the car taken from a newspaper article actually was taken from a magazine article more accurately. So I think the promise is very, very important, but I think understanding human nature as even more important, which is, it doesn't matter how good the damn promises.
Most people aren't going to immediately say yes. So if we stop trying to like, push the rock uphill and try to get more people to say yes, on the first pass, which usually equates to making a bigger promise louder this time, like while flying Lamborghinis or something, you know, like we just quit doing that and like, okay, let's accept reality and understand that.
The most people probably ain't gonna buy. And so we just follow up with them and build the relationship while pitching simultaneously in my experience, that's worked a lot better and there's a, there's all these phases of consumer awareness that Eugene Schwartz allegedly talks about in this book, breakthrough advertising, which I have yet to read all of, because it's just so grownup sounding.
It's hard for me to understand, but I do know that like there's people who don't know nothing about what you're selling. The people who are pretty aware that there's a, uh, a thing that they have a problem with and there's a solution for it. And I think today, the majority of patients  for anything or at that later stage where they they're unaware consumer, you know, there's very few things where they're like, I never knew I had this problem and Oh my God, this is an amazing discovery to solve this problem.
I never knew I had, which means now. There they've been getting blasted with the emotional, like overblown over sensationalized stuff forever and being the polar opposite of that, which is the, you know, what was it, read this, if you're thinking about putting a water filter in your house, like that actually works by sheer virtue of being being different.
And that's a very generalized statement I'll admit. Um, but that's why I think that kind of stuff works and that's why I don't really get too. Attached to making like, okay. Here's you know how to craft the perfect headline and all of that kind of stuff. It's better to have an okay. Promise made repeatedly with consistency.