How should we expand our target interest when many of the related interests and audience insights are not targetable? - Frank Kern Greatest Hit 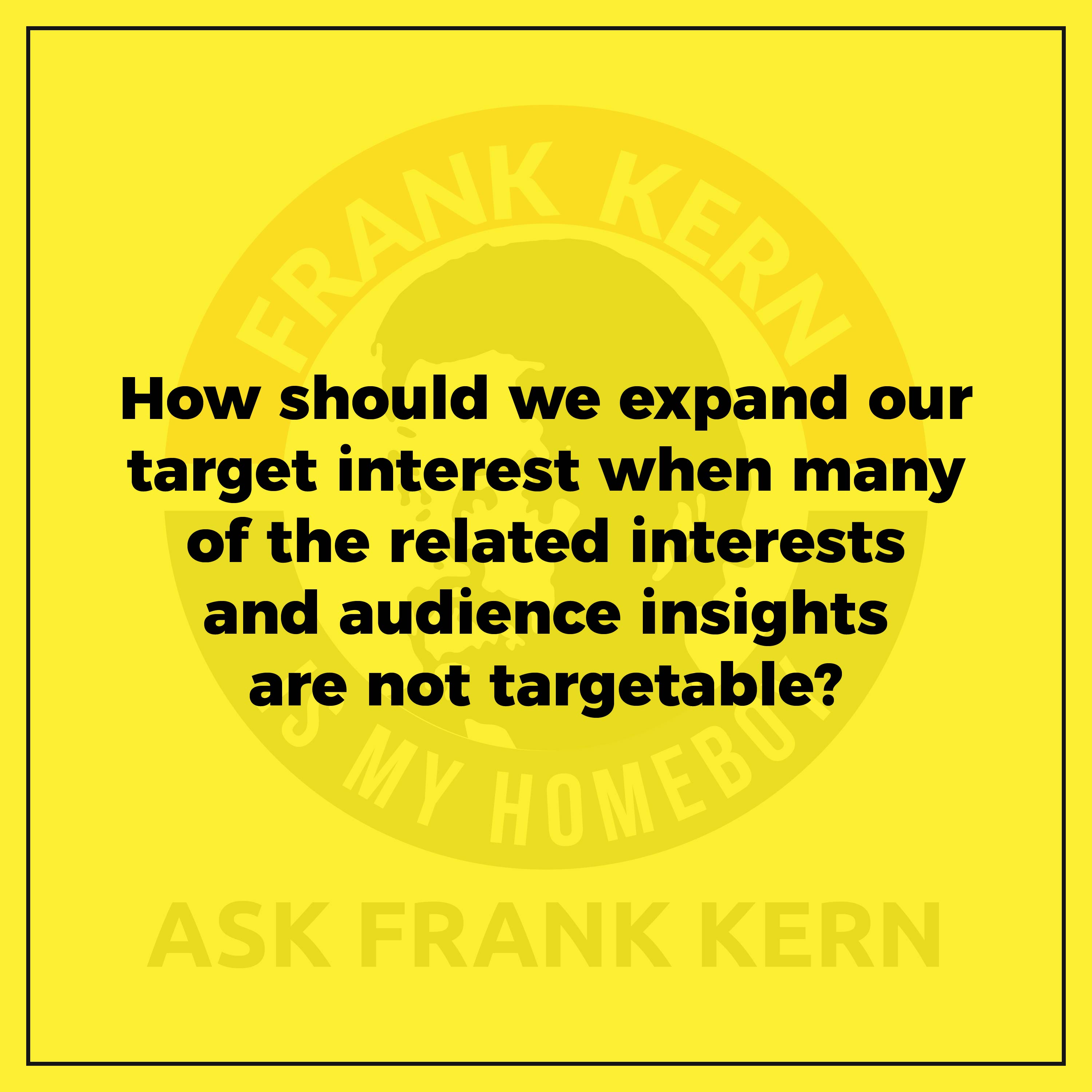 How should we expand our target interests when many of the related interests and audience insights are not targetable? So I'm going to guess it's a situation like...

How should we expand our target interests when many of the related interests and audience insights are not targetable? So I'm going to guess it's a situation like real estate or something. So I can real estate. You can't use the word like real estate or mortgage or whatever else it has to go into the special ads category and everything is horrible like that.

So you literally just go freaking broad. So let's say for example, I wanted to get, um, people who were interested in buying a home, but we can't target for people who are interested in buying a home. There's really no. Targetability there there's you can't like type in realtors or whatever. Um, it just doesn't work over here cause the special category crap.
Right? Uh, you can go, I should probably just show you this, that it's telling you. It takes me a minute for the brand to kick out and sometimes y'all hang on. Um, let me go to this other account here.
Yeah. Can't remember that Dennis Guy I was talking about from the agency. I can't remember his name. He was such moral
people, just like I wouldn't leave them. Like, do you realize he just made a crap ton more money? How about you? It's Nate on the itch and Bay? Um, okay. I should share my screen here. But that's why, that's why we got folks like Tyler and Clarissa. Cause they're friendly, normal, well adjusted people. And I am not as much.
Okay. So let's say you got it situation, right? And like we're doing the real estate example. Um, never forget. It's okay to go broad and sort of guess and see what happens. Cause we're not really spending a lot of money. We're just testing. So in this particular case, all right, we're in a Mirka and. We could go and, you know, we could still put it in the state or whatever and all that stuff we could go and I can say browse.
And then I could go, I think it's demographics, life events, and I could go new job for one, possibly. It's good because people who are getting a new job at possibly moving a new relationship, people want a new relationship, possibly looking to get an apartment or a new home together, newly engaged, all of that stuff, newly wed, all of that stuff.
Um, and then, uh, Excuse me, parents. There's the parental things like new parents and all of that stuff. So on target, parents of people are people obviously zero to one years of age. So that's somewhere in here and the, uh, yeah, here we go. So I would target logically. These folks, new baby, gotta get a new house.
Current house filled with danger, everywhere. The kids going to get killed instantly. We have to get a house made of sponges. Uh, you know, that's what you think when you have a new baby, cause everything is an implement of death in your home. Especially if you've never had a child before, you're like, Oh my God, the toothbrush is a weapon.
Right? So you got to get rid of that. And then you've got that whole other side of the coin, which is Oh, empty nesters. We finally got, you know, Terrance out of the house. Let's move and, you know, go to get that condo Palm Springs, right. Or whatever they want to do. So you got that as well. Um, so there's a lot of ways that you could sort of work around.
Uh, the idea is to do, and like Chris luck is a great examples. If you go in the group and you find his post, um, he ran this stuff and one of his interests, he, again, he's trying to get people who want to. Get paid to talk about brands and social media or why it's so hard for me to say that phrase. Um, but one of his interests was cosmetics, you know, like what really?
So it's like you sort of searched for maybe either in there. I don't know. And then you use the dog whistle copy to attract them. And what happens is when you go really broad like this, and you're not trying to super niche it out, this is real bang sheet to show your ads. So you can sort of to have most people ignore it.
But still the ones who don't ignore it, they're responding at an acceptable cost per response. So that's how you do it. You know, and if I, if I knew the audience better, if I knew the market better, I could come up with maybe some better examples other than using the real estate example. But this is what we do with realtor clients who are like, I can't say anything, you know, we can't target people by income or all that stuff is the way we do it.