Should I have one page for my training and a separate page for affiliate marketing? 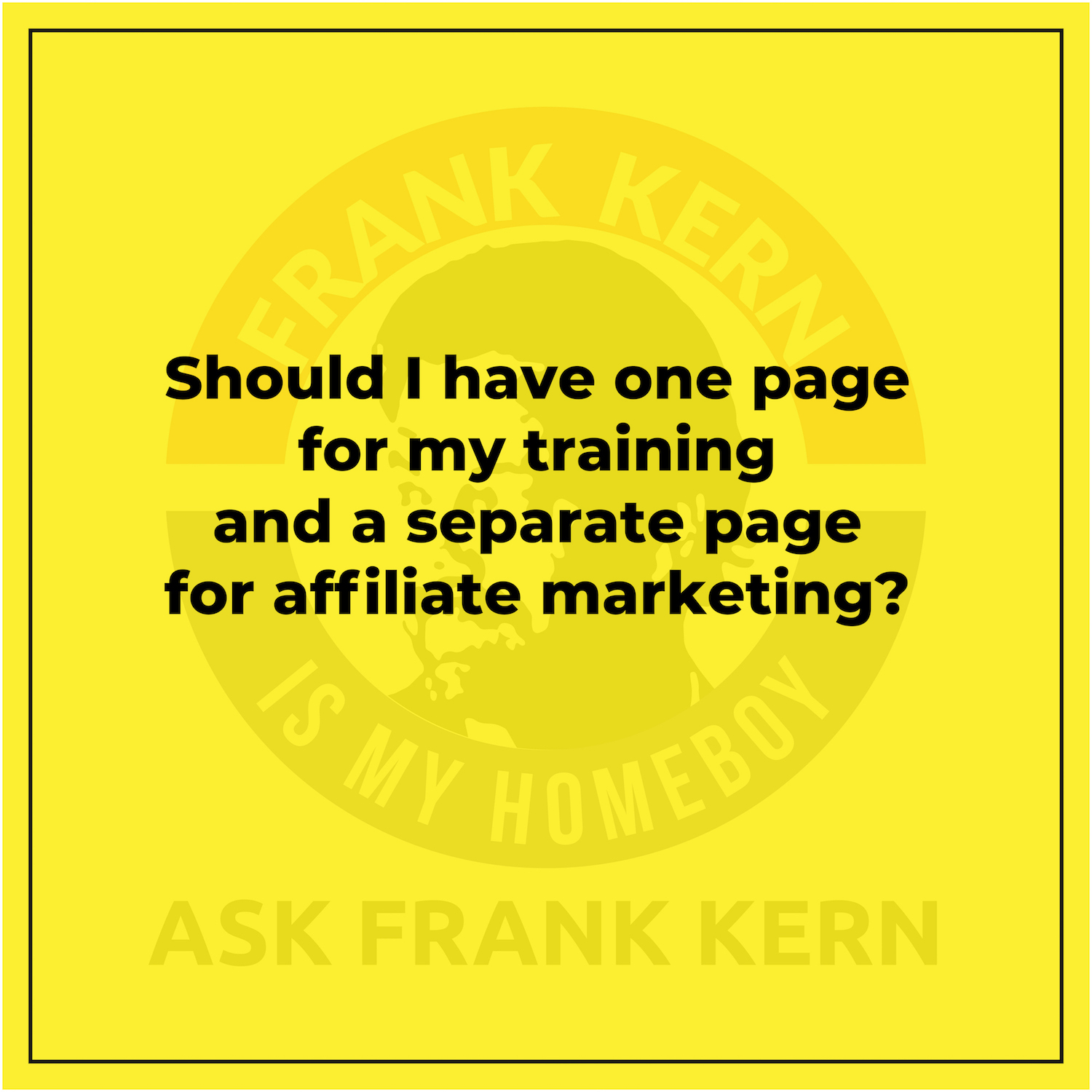 When I set the page up, uh, I did not set up a business account. So I'm assuming that I have to set up a business account with that. And in order to run ads, is that correct? Especially if you want to do stuff like retargeting and all of that. Yeah. Okay, great. Uh, secondly, my purpose for starting that ad was to brand myself.
Um, I have a lot of background in consulting and training and, um, one of my main goals is to, uh, work with people who are. Uh, trying to start up their, their, their businesses and go in so many different ways and just trying to get some strategic planning in place so that they can save some time. Um, so in that, that would be part of what I would be using that page for it.
But in the meantime, I've been a starting putting up with some affiliate marketing as a second project. I wasn't really sure whether or not I should be looking at that one page to kind of deal with both of those focuses. Or whether or not for the affiliate marketing aspect of things, because I would probably be dealing with more than one product.
I would have a page for that. And then a page for my coaching. Yeah, I would drop the affiliate marketing thing ASAP and go straight into the strategic Marie for small businesses. Um, because with affiliate marketing, you don't control anything, you know, you're, you're bearing all the brunt of the expense or driving the traffic and they can totally screw up the after click.
And there's nothing you can do, but you don't have to get part of the money. So that's why I'm like, eh, you know, I don't like that. Um, with, with the other field you're considering. It's all net, you know, you're just talking. So like every sale is going to be, I mean, a hundred percent and that's a bit of a stretch, you know, you've got general operating costs, but there's no hard cost for the cost of goods sold and it's a lot of people need it.
And want it. And so we do a ton of work and B2B, the small businesses and the, the real opportunity in there is not necessarily the person trying to start the business, but the person who already has one and yeah, so that's just like, and who's about, you know, a year to two years and, and it's just not coming together, maybe because they're still working maybe because, you know, they just can't, uh, strategically get it together and they want to move.
And they want to actually see themselves make some progress. And that's the one who's just starting up. Yeah, the, the sweet spot business. I forgot the stats. And that's how I think it's two or 7 million of them exist in the U S alone. It's a business between, um, 500 grand a year and 5 million. And really, even over 5 million, as long as it's owner operated.
And so we just, I mean, we know this space, like. The back of our hand, their biggest challenges are that they're trying to do 750,000 things at once and they just want more revenue and less stuff that sucks. And the, the fix usually is like, as simple as going all right. What used to work real good. And they're like this, and you're like, we'll do that more.
And they're like, You know, because they start the business and they're great at it. And then they start hiring people. And now they're doing all this stuff that they, they're not trained up and doing, and they go down all these rabbit holes. So, um, It's, you know, the answer, the question, if you do the affiliate thing on the business coaching page, it could give mixed messages to people that go to the page.
The good part of that is not many people are going to go to the page. Um, you know, your, it doesn't really matter that much. If what the actual Facebook page looks like, it's more of what happens after they opt in and you know, the stuff they see from you and ads. Okay. All right. That makes sense.