Any recommendations for the hiring process when basically looking for a clone of yourself? 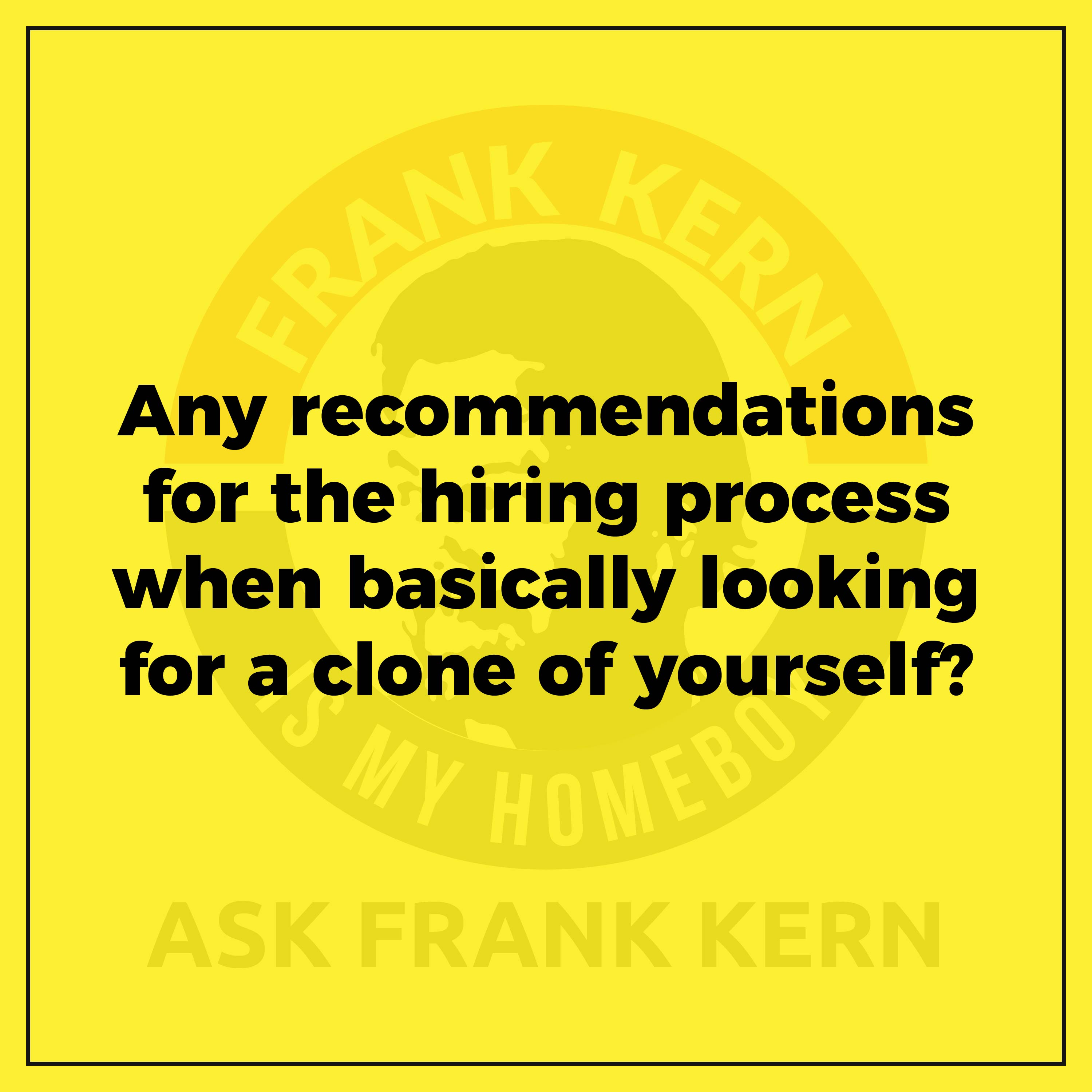 Do you have any recommendations whenever you were going through that hiring process, what you were looking for? I've never hired that person, 'cause I am that person. So I don't know what necessarily...
I'm looking for a clone of myself...

Do you have any recommendations as far as, um, what you, whenever you were going through that hiring process, what you were looking for? Like I'm, I've never hired that person. Cause I am that person. So I don't know what I'm, what I'm necessarily, I'm looking for a clone of myself.

Yeah. You don't want to look for campaigns. They've run. So you make them give you a case. Studies like show me a campaign. Give me the numbers, you know, let me see on winter and the new I okay. And then you want to make sure they can follow instructions and the key to it, uh, to making an agency work is number one. You've got like, if you're going to like grow it grow, if you're going to have like 20 or 30 clients and you're good, but you're going to try and get hundreds.
So we grew ours too. $895,000 a month in six months, so close to 900 grand. Um, and then I gave it to grant because I love grant and I just was worried about him, you know, and I just want him to be able to feed his family. So, um, if you're going to grow it, then like everything has to be documented for the people that are, that are client.
Facing. And so it's not only like you have to document, how do you onboard somebody, you get the assets from them, but you also have to document what to do. If so there needs to be a playbook for every imaginable situation, you know, like, okay, the client is not getting clicks. What do I do? Uh, so if you leave it all to, to the whimsy of a team of like 20 or 20 media buyers, um, You're going to have completely disproportionate results across the board, because they're all going to have different strategies and different ideas.
So you have to get them all on the same process, you know, and that that's very, very important. Ed. I'm the second year piece of advice I would give you is be very careful with and selection because it's, as you, no, and as you've seen in this challenge, like send them traffic. It's not really that hard. I mean, we got, you know, leads and stuff.
No problem. But. Getting those leads to convert, which isn't your job, by the way, you're sending them the traffic. They're the ones that need to convert. If the client can't do that, there's no way you could win. Oh, sure. Cause then it's the lead's fault. Cause you know, the leads are bad cause yeah. And unfortunately most of them can't and so that's where it becomes really like you.
So if someone were to be like, listen, you have to start and run an agency or we're going to blow up the entire world. Um, that'd be like, ah, and if I couldn't kill the person saying that and I had to do it, I would target like barbershops. Dry cleaners and stuff. And I would just run TV on the phone, which is like video ads to, uh, within their local service area going, we exist here.
We are, come on and see us. We got a special and not even worry about, like to build website funnels or make sure they have their follow up stuff. And I give them a legal pad and I would say what I want you to do. It was write down how many phone calls he got and what your daily count is and compare it to last month.
And let's see if he made more money. And, uh, that works real good. Like that's a dream client and I wouldn't charge him a lot, charge him four or 500 bucks. Um, cause they're not gonna spend a lot of money on media. You don't have to do much, you know, and just run the ads and do the targeting and make sure nothing blows up.
And that's how I would do that. But that is, you know, one person's take on that whole thing and take it all with a grain of salt.