Frank, how do you script your videos? - Frank Kern Greatest Hit 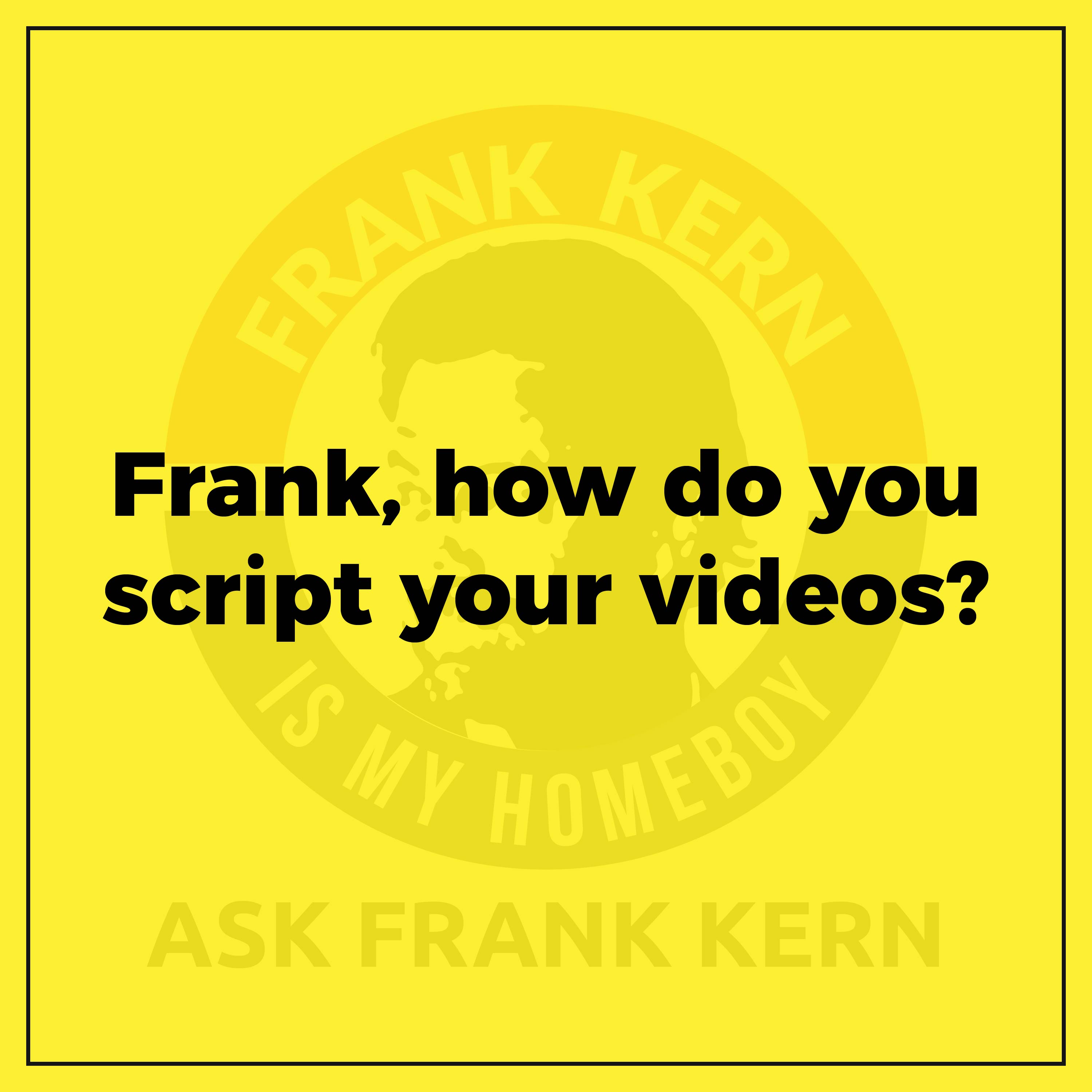 The question is how do you script your videos? And the answer is I personally don't script my videos, but I do have a framework...

The question is how do you script your videos? And the answer is I personally don't script my videos, but I do have a framework. Alright. So I'll talk about the frameworks for you for a minute. So before you ever shoot a video, Whether it's a, you know, any sort of educational pitch or direct catcher story-based pitch or whatever, you gotta do a little bit of homework first. And this is like minimum viable homework because nobody wants to do homework.

So first thing you gotta do. Is understanding the desired outcome that you want the viewer to take. Right. And so usually that's going to be a sale, but it could be a registration or whatever. So that's step number one. And before you ever commit words to paper, or just start making stuff up on camera, which is often what I do. This is make stuff up on camera. So that's thing. Number one. What do you want him to do? Thing? Number two is you want to come up with all of the reasons why they should do it, the benefits to it. All right. And thing, number three is you got to think of all the reasons why they would not do it. So if you've got those three things in order, then you really have the winning or at least the good raw materials for a pitch. Right. And so usually the framework. That I like to follow is going to be a core framework, surrounded by some other types of frameworks. So the core framework is always this. Here's what I got. Here's what it'll do for you. Here's what I want you to do next. All right. And I learned that from John Colton. The surrounding frameworks could be all right. Am I going to wrap that pitch with education, for example? And so that would be a tutorial style video. So in the tutorial style video, I still keep. All of the original law materials in mind. Right. So I know that say for example, that the tutorial style VSL, the objective of that is to sell, I don't know, a cooking class. I know that the viewer, their primary objective is to learn how to grill a steak without burning it. All right. And I know that a lot of the reasons why they wouldn't buy the class might be they've tried in the past when they've ruined the steak. The state has come out tough. They don't think they have a good enough grill, whatever. Right. So at the core of the framework is always, here's what I got. Here's what I want you. Here's a little do for you.

Here's what I want you to do next. But now let's say I'm taking that educational frame work and wrapping that around the core framework, in that case. It will be something like this in this video today, we're going to talk about how to, yeah. And then insert the big thing they want to do. Right. And so this is going to be how to grow the perfect state. And then we might say, and you're going to find this video useful, even if, and then. Insert stuff they've experienced frustration with before. Right. And so that would be your intro block right there. Then for the educational piece, usually like to give three big picture pointers. Here's what I've learned by the way. It's it goes up. Against one's desire to be helpful. So it's, it's difficult to do this from a desire to be helpful standpoint, but the more you teach in your educational video sales letters, the less you sell typically. And, um, I wish that were not the case because I tend to over teach and therefore I have to follow up with people 9 million times email. So you want to stick with very big picture concepts, and then you take your core framework. Which is, here's what I got. Here's what it'll do for you. Here's what I want you to do next. And you bolt it. On to that first educational bit. And so that's the way I go about creating videos and, um, I've never scripted them for myself. Uh, it's very difficult for me to do that. Usually what I'll do is number one, just turn on the camera and start yapping and hope that it comes out okay. Which is where, you know, but often I'll test it anyway. And if it works, I just leave it running. Um, or. I will write keynote slides and I'll just have the big picture ideas and the keynote slides and I'll press record and film, you know, traditional desktop video sales letter using PowerPoint or keynote. And as I'm going through those slides, elaborate on the big picture concepts and hope that it works out and it usually works. Okay. And that's the way I do it. I like to keep it as, uh, as simple as possible.