Have you worked with clients from Europe who sold their products/services to US customers? Is it more difficult for Europeans to sell on the US market? - Frank Kern Greatest Hit 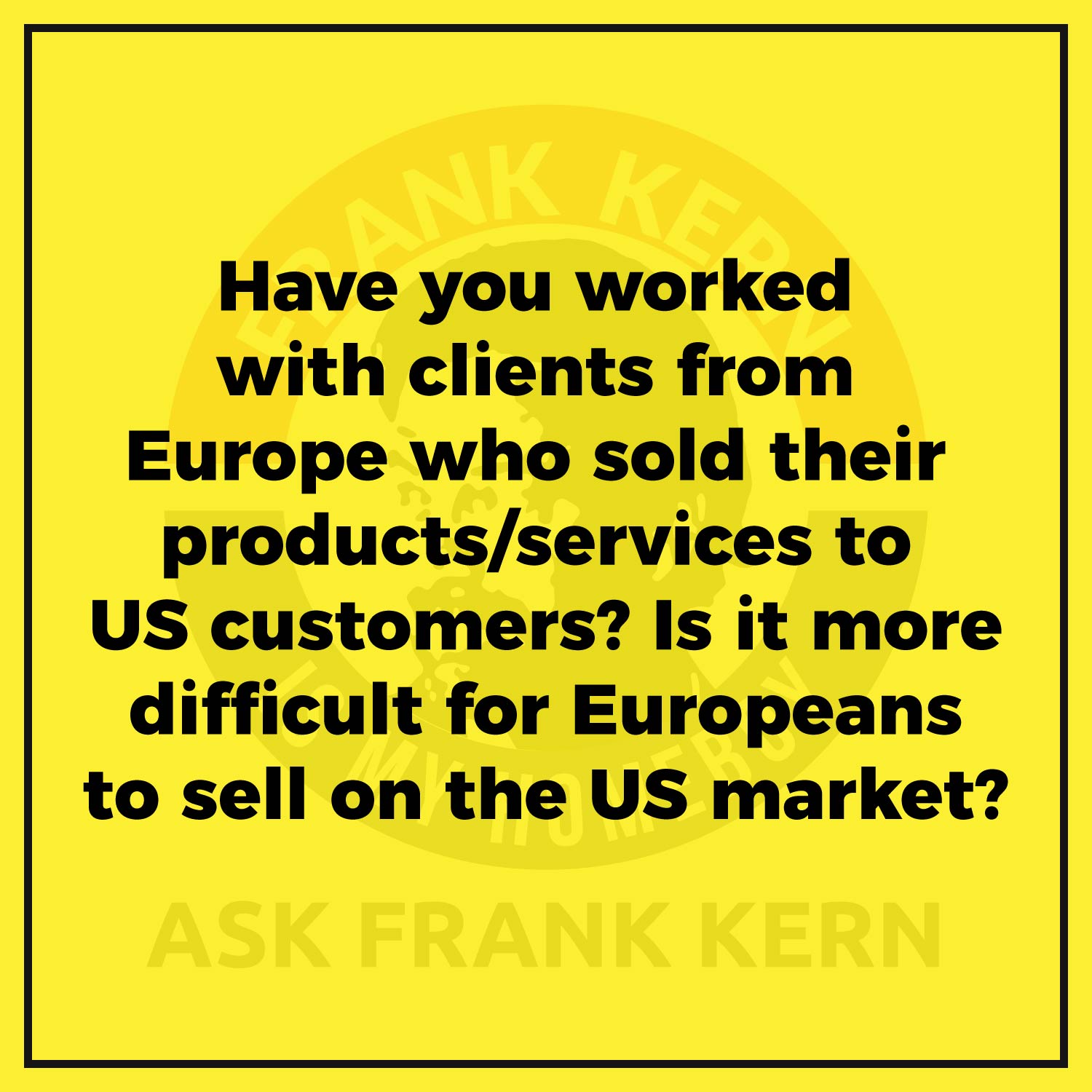 Have I worked with clients from Europe who sold their products/services to US customers? And is it more difficult for Europeans to sell on the US market? Yes I have, and the answer is no.

Have I worked with clients from Europe who sold their products/services to US customers? And is it more difficult for Europeans to sell on the US market? Yes I have, and the answer is no. It isn't, the only time I would say, Hey, don't mess with trying to sell outside of your country is if you're already really, really well established in a certain country. And it would go to the same thing for United States, trying to cross over into Europe, for example. So if you're already really, really well established in your current country and you haven't maximized everything that you can get out of your current country might not be a good idea to go and try and sell it to a different country if doing so. And this is an important distinction, if doing so would require you doing anything differently than you're already doing.

So I'll give you an example. I've got some clients in Russia that have built an incredible piece of software as a marketing application, and it's, you know, you can take payments and build pages, and it's really, really, really cool. It's also written in Cyrillic. They don't have, you know, they're not integrated with us payment processors and they've got, I don't know, let's say a thousand customers in Russia and they're like the biggest guys. In Russia. And there's a gazillion more people that they could get in Russia. And they were like, Hey, you know where we want to come over here in the US market? And I said, okay, well, you know, there's plenty of room for everybody. What's going on in Russia. And when they told me that, well, you know, we're kind of the biggest guys in Russia and we think it's time to come over there and see what we could do. And then we started examining how much work it would take for them to, you know, build new marketing, new language, new, all of that kind of stuff. Like, like new user interface. Cause you got to think about it, like everything isn't Cyrillic. Cause it's totally not even the same alphabet. So, when they said, yeah, you know, we've got whatever, a thousand or 2000 users. I was like, how many businesses are there in Russia? And, you know, we figured out there's a whole lot more to go ahead and get over. There was really, really easy. So that would be the only instance where I would say, yeah, it's going to be harder, but if you remove things like that, No, I don't see why it would be any difficult. And then you got logistical things, you know, as if you're shipping something and that, you know, it's going to cost a thousand dollars to get the, doohickey shipped from Brussels to Atlanta. Then that might be a challenge. But other than that, nah, I don't think so.