How can I build clientele for my wife’s salon targeting a 50-mile radius? - Frank Kern Greatest Hit 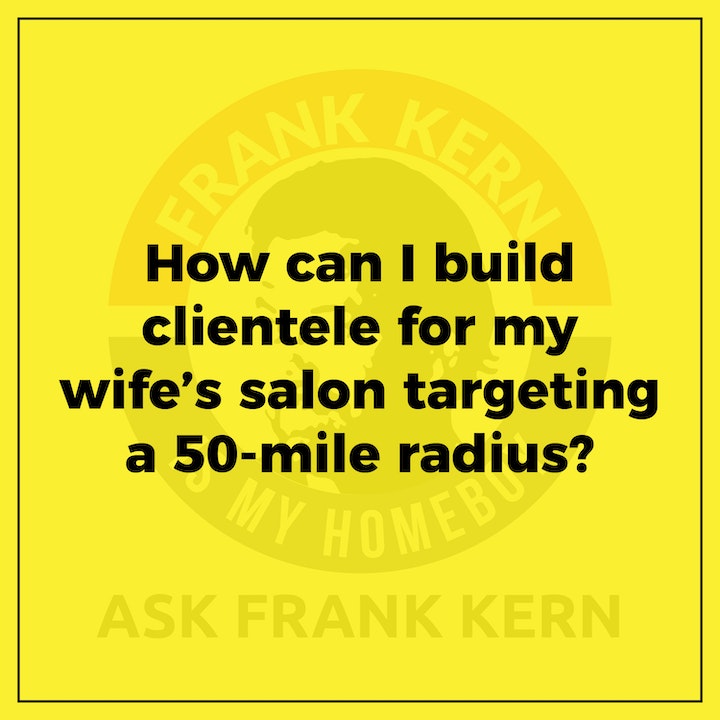 How can I build clientele for my wife's salon targeting a 50-mile radius? Dude, this fits in perfectly with the earlier question of what would you do if you lost everything and only had $10K and had to start all over. I would service businesses like...

How can I build clientele from my wife's salon targeting a 50 mile radius, dude, this fits in perfectly with the earlier question of what would you do if you lost everything and only had 10 grand and had to start all over.

I would serve as guys like that sounds a little bit funny. I would serve as guys like Jacob. Um, I would serve this businesses. Like the one Jacob is referencing is probably a better way to put that. Um, and so here's what you do. All right. Make a lot of videos that are like commercials. Don't make them professional looking.
So I've tested this. All right. It needs to be just like normal shot on the phone, on a GoPro or whatever. And then let's say that, you know, the salon it's called Mrs. Mirror's house of hair, you know? All right. Hey man, this is a, this is Mrs. Mirrors over here, Mrs. Meyer's house with hair. And you know, what we do every Tuesday is we have like, you know, I don't know, special pair dying, uh, discount and look, here's Jamie.
And she just got her hair did and whatever, and yelling come on in. And this is what it's like and make like a billion of those and, um, showed them on social to the target demographic. And you can do this, like, So great. You know, so those will be considered general ads. All right. So I would run those two.
Let's say that your wife's ideal client is a woman who's between the ages of 20 and 38. I'm making it up, you know, and so just run those women 20 and 38. I wouldn't do a 50 mile radius of the salon and less people like habitually drive. 50 miles to go get their heard. Did you know, man, I ain't going to tell you that, but you never know, you know, women are different than us.
Like I'll go months in this. Be like, okay, I even have to get it because my wife doesn't talk to me. Right. So I'd probably be 10 miles max, but you know, better than me with that. So that'd be one. And then you can target on things like life events. So getting married is one. Getting ready for the big day, coming with us to do a bridal make-over for you, um, in a new relationship as another life event, go into Facebook and look at your targeting options.
There's all these life events you could make ads for the reason I suggest this, you set it to video views, objective, not convergent, nothing. Just tell them the name of the business and where it is. That's it. You know, trying to get clicks or anything. This is television on the phone. The reason I'm suggesting, I think it is because it'll probably cost you like a dime.
To get someone to watch that whole commercial, if the commercials like a minute, like that's ridiculous because you've got a targeted individual watching that commercial and it's just frequency. It's a frequency play. It's an it's unlikely. You could spend more than three or four grand a month on ads.
You know, I don't think you could, without like you would just blow out all the inventory. The salon would be overbooked at that stage. So that's what I would do. And I'd have a little patience. You know, it probably wouldn't work in the first week. You mean about two weeks for it to run. And the only way to track it is redneck analytics, which you, you just keep track of how many calls you got and how many people come.
And you're like, well, I got less appointments before we started doing this. And I got more. Now that we're doing it, I'm going to keep on doing it. That's like the best way to track it. Um, learn all of this by running ads for a furniture store, by the way, cannot believe how well it worked. Well, the dude, Rob Fu Bayer, my man, coolest guy ever.