How do I expand and find different targets within a sub-niche? - Frank Kern Greatest Hit 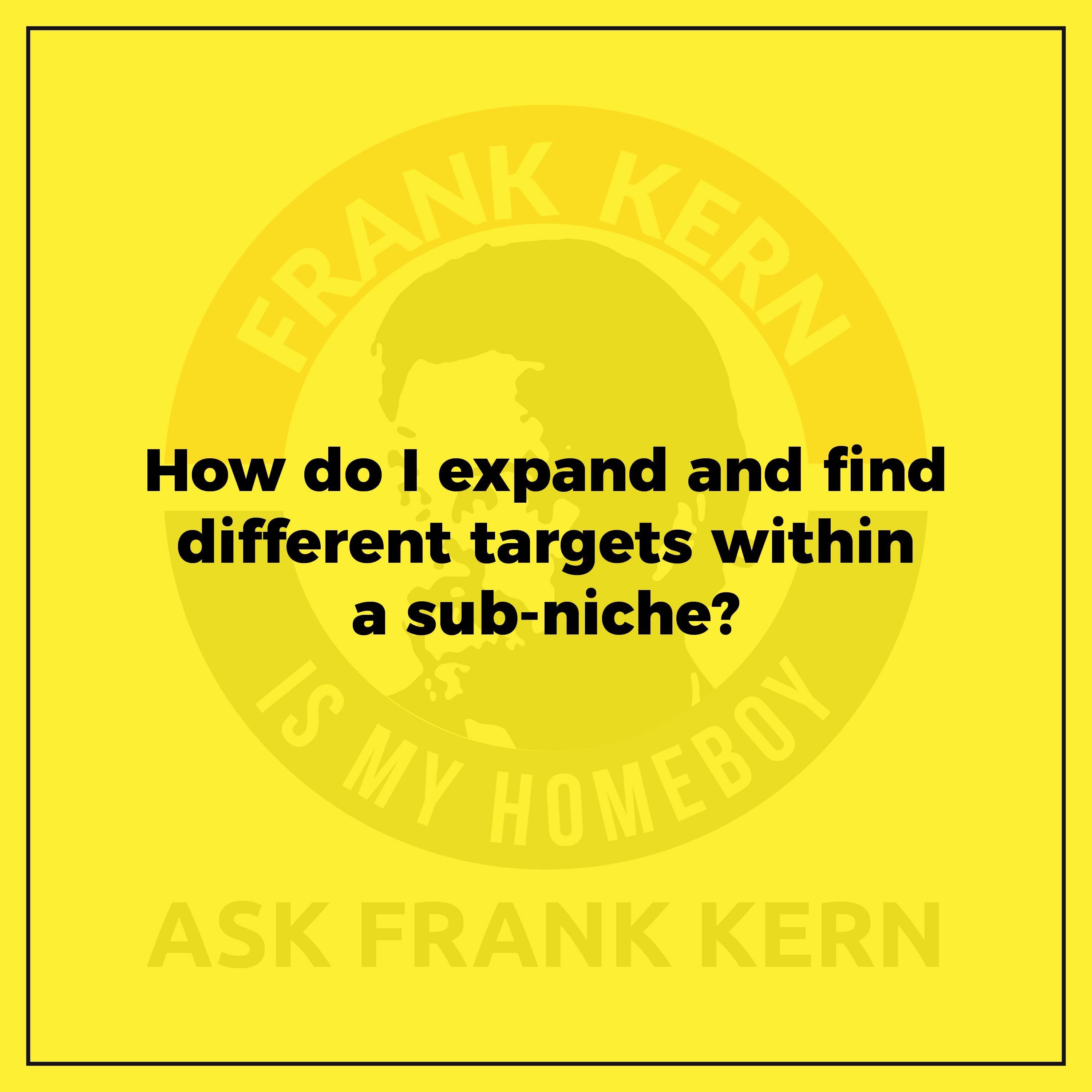 So my niche is a sub-niche, it's dreadlocks, which is a sub-niche of natural hair. And so if I were targeting natural hair, there are lots of influencers and products and brands that I could target, but not so much, being the case for specifically...

So my niche is a Southern beach is dreadlocks, which is a sub-niche of natural hair. And so if I were targeting natural hair, there are lots of like influencers and products and brands that I could target, but not so much, um, being the case for specifically dreadlocks.
And so I'm trying to, to think about how do I expand and finding different targets when I can't get, you know, When there's really not targetable the ad. Copy you do it in the ad copy. So like what's the product, for example, that someone who's into natural hair would use or an influencer they might follow, um, like for influence that they might follow my natural sisters or a product might be Carol's daughter or, you know, things like that.
Okay. And so I would brainstorm as many of these things as possible. Right. And then your ad would say something like read or watch depending on what the lead magnet is. So we'll just say, read this and actually see like type it. And what's the net effect of your stuff like to grow dreadlocks, have cooler dreadlocks to maintain.
So I, I sell hair products and accessories. So it's basically the lifestyle. Like I have apparel, I have, um, um, one of the popular products is a lock detox, hairball that helps you get the product buildup out of your hair. Um, and then I have accessories for, um, you know, dreadlocks and things like that. It might literally say, read this if you have red locks.
Right. And then that would be your headline. And then the lead magnet is a list of must have things to maintain dreadlocks. Okay. Yeah. Yeah. And so, and now what's going to happen is not all of these folks have dreadlocks, but if anyone's going to have them, there's probably going to be people that are in these audiences versus someone that follows.
Like, I don't know, who's the obnoxious, uh, angry stock guy, um, or like someone from Fox news, you know what I mean? So it's like, it's usually these groups of folks are probably going to have some dreadlock people in them. So it's the same situation where you choose a probably audience and let your copy be the filter.
That's in your ad. Okay. So, so thank you for that. That does make sense. Um, so my follow up question for that is, um, I'm getting back into the Facebook ads. I've tried several times and. Like basically only ever make my money back. So that's why I'm here. So it was, but, um, the last that I heard was that if you had, you know, words like you and yours and your copy, they wouldn't show it, but I'm assuming since you're using you as your dog whistle, that's no longer the case or is that true flag?
If your ad can be interpreted as making them feel bad. So if it's like read this, if you're fat and lazy than me, No, you know, that's not gonna work. Um, so there's really nothing wrong with having you and your it's just, if you use it in conjunction with like things that can trigger their system, uh, where they're looking for copy, that could provide a negative user experience where as our special little snowflake ad reader could get their feelings hurt from reading the ad or something.
That's where you gotta be careful. But read this. If you have dreadlocks, it's fine. Okay. Cool. Okay.