How do you accurately categorize and elevate the appropriate price for tools such as 1-on-1 coaching, group coaching, memberships, and live events? 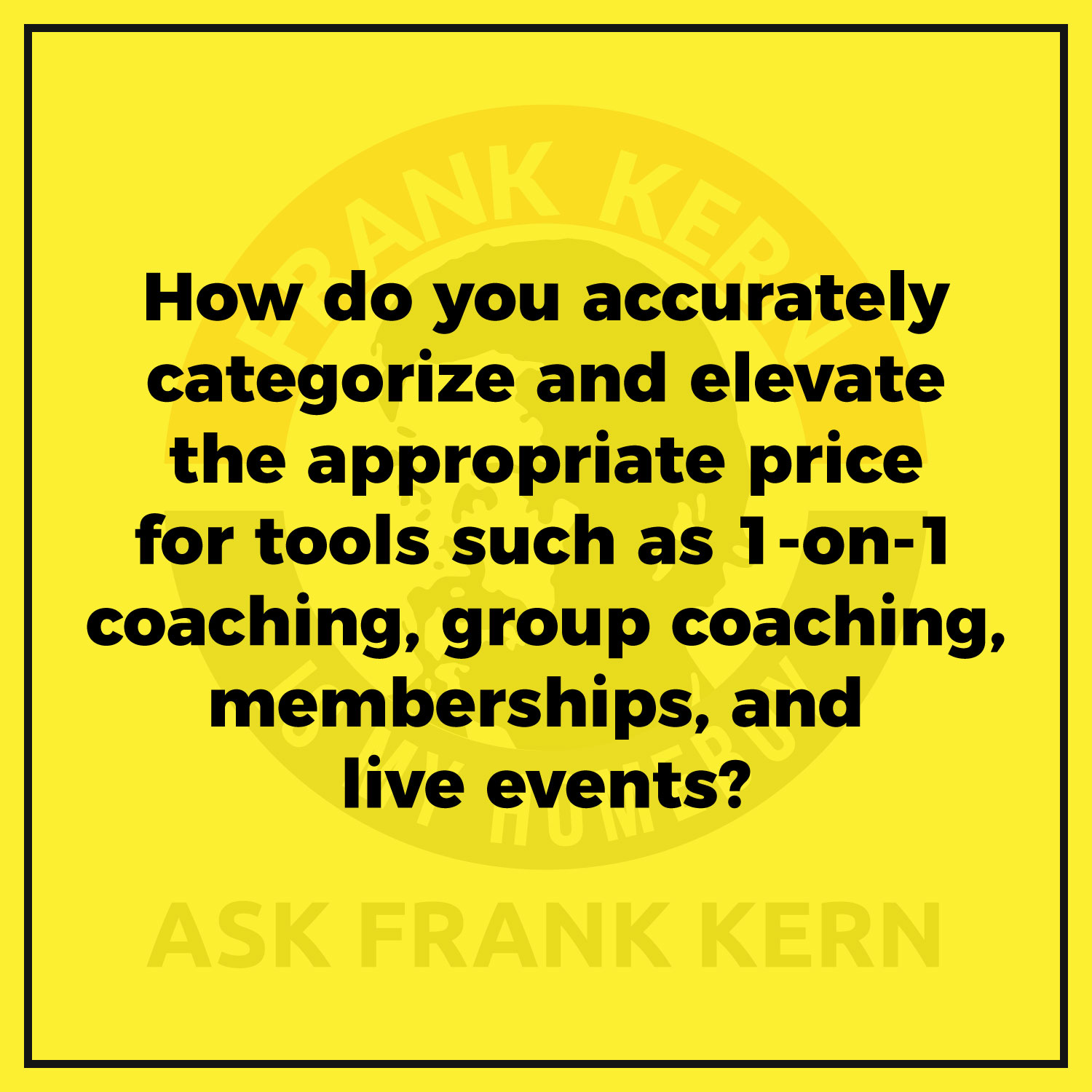 As I pivot more from the services side or the agency side to the coaching stuff, just curious your thoughts on how to accurately categorize the appropriate price of that in my head and how to continue to elevate that. So there's a couple things. 1....

As I pivot more from the services side or the agency side to the coaching stuff, just curious your thoughts on how to accurately categorize the appropriate price of that in my head and how to continue to elevate that.

So there's a couple things. 1. It's gotta be consulting, not coaching...

So just curious your thoughts on how to start to, I don't know if pivot is the right word or transition or augment, the amount that I'm charging for either one on one coaching or group coaching, or have a membership, and it's all around funnels and ads. And that's my expertise as an agency and what I do from, from a day to day perspective. But as I pivot more from the services side or the agency side to the coaching stuff, just curious your thoughts on how to accurately categorize the appropriate price of that in my head and how to continue to elevate that.

Okay. So there's a couple things. It's gotta be consulting, not coaching, even though technically speaking, they're both the delivery of advice to people and the reason why it was a perception around what coaching is versus the perception around what consulting is, is literally the same thing. But if you say coaching, cause it's gonna feel like X. And if you say consulting, it's more magnetic to people with money, et cetera. So that's thing number one, the other thing is assuming the outcome is of greater value to them than the price charged, regardless of what that price is. The owner, the only thing you got to do to transition is literally start or charging new one. I'll, I'll illustrate it with a story. So back in 2009 ish or something, you know, during the, the Hunter Thompson era, uh, and guess that was more of the Hunter Thompson, Keith Richards combined era. Now I'm just in the Keith Richards zero, you know, I've abandoned the Hunter Thompson methodology for. Personal health reasons. Um, I had done mass control and all that. It was a couple of thousand dollars and literally was like, I think I'm going to see if I can sell a consulting for a hundred grand. And there was no, here's why it's a hundred grand. There was no rationalizing it. There was no big announcement. There was here's what I got here. Fluid will do for you. Here's how I want you to do next. Give me a hundred thousand dollars. And within, I think it was two or three weeks. I had a check. And a client for a hundred grand and that was it. And so it's, it's all mental. Yeah. And again, I'm, I am saying all of this with the understanding that the thing you're selling is of greater value to them than the money received. That part of the equation has to be intact or else it's not going to work long term, but if it's intact, dude, just raise your price. Then as, as Dan Kennedy, you know, one of the gazillion things I learned from him, he would always say, Hey, you know, the. The big secret that charging high fees is keeping a straight face when you quote the fee. Meaning, you know, not that you're trying to pull anything over on them, but not being afraid to do so in the absence of fear, rationalization, anything like that, here's how much it is, the end, you know. Awesome. Thanks man. Appreciate it.

Yep. I'll give one more thing about that and it's going to be. The who you're able to sell to is going to be dependent on who you're attracting into the funnel. And that is dependent on the content and the bait quote, unquote that you put out. So be sure you're putting out whale bait and not minnow bait, you know, so like my, my a hundred dollars, Wescott some sales thing is in many ways it's minnow bait, because it would assume the person is in that position of starting over, even though who I really want, I'm trying to filter out it's people like that. You Jitsu instructor that did that. Nick had mentioned earlier, You know, discover the secret campaign I use to make an extra $3,000 a month. That's not willing to be magnetic to the high ticket person, uh, the high ticket person for consulting. And you know, this is usually like the business owner who's doing between 500 grand and you know, five to 20 million a year. And it's owner operated. Those folks respond to very little. Different messaging and content such as replace yourself, train your team better, get more done, maximize revenue without added expense, that type of thing. It's magnetic to them. So it's really important to get the right people to quote the high ticket too.