How do you create whale bait to add new upper-level prospects to your pipeline? - Frank Kern Greatest Hit 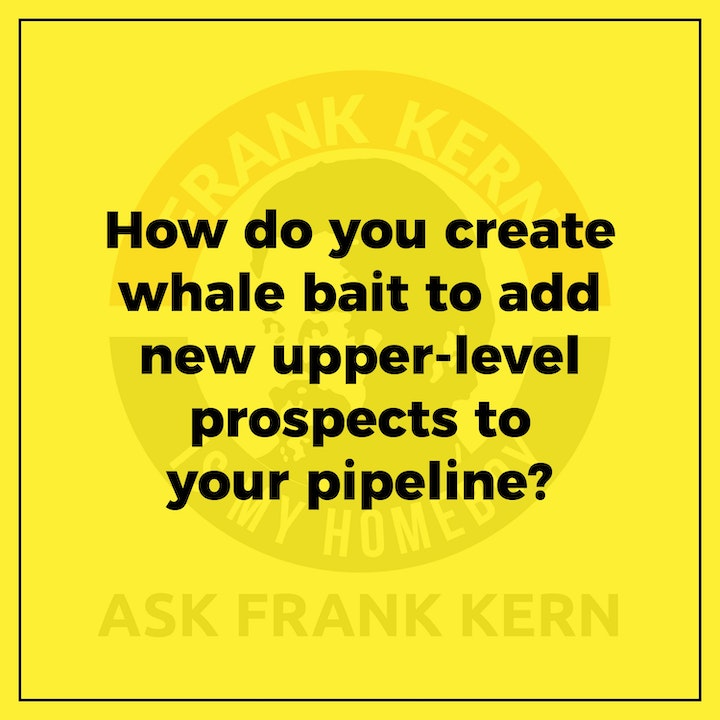 I know the types of people that I was attracting before aren't going to be the ones that work with me at the level that I do, these new ones. And so it begs the question, how do I get more qualified prospects in the pipeline?

A couple of things, it kind of adds to that, I guess recently over the last, like two, three months now, I've really upleveled the types of clients I'm working with bigger, bigger types of clients, but I'm having a hard time in attracting more of them because I don't fully understand because there are newer and I'm up to level a lot of them, I don't fully understand their, their, their pains yet. So attracting and putting out that whale bait that you just mentioned. Like, is there anything that I can do other than like going to my current ones that are at this, at that level and really just creating, does that, does that make any sense, like creating the content or putting it out there? Cause I know the types of people that I was attracting before aren't going to be the ones that work with me at the level that I do, these new ones. And so it begs the question, how do I get more qualified prospects in the pipeline?

Yeah. So like, it's, it's more of that like, whale bait, I guess it's really, I don't really know how to create that. Whale bait for them because since it's a new word, I have, some of them are newer. I don't fully understand their pains yet. I know what they need similarities there, but it's not exactly the same. And so this is for the purpose of getting new people in the pipeline, not dealing with the ones you've already got. Right? Yeah. And so it's, it's getting new people that are at the level that I just got these newer people at, like, they're, they're a lot more established as far as business wise.

Cool. And so it is a good news. It's pretty simple. Step number one is to be really, really clear on who you want, you know? And so I always, I define like a dream client as owner operated business, doing half a million to 20 million a year, and that the difference between those numbers is irrelevant, right? He is owner operated, you know? And so, so that individual, if you understand what they're going through, then you just talk to what they're going through. So here's what they're going through. They are often finding themselves working 10 times harder than they did when they started the business, but they're not making. 10 times the revenue in exchange for the work. They are often juggling like 7 million projects all at once and they feel very, very overwhelmed and reactive, and they often have a lot of staff and team and stuff that they're having to focus on. That is not the stuff that got them, the money. In the first place. So it's like, they grew to this level of revenue and in doing so now they have to take their eye off the stuff that got them the money and do stuff that doesn't get them the money. And it's not there. Their comfort zone. So talking to that and giving solutions for that, there's typically my experience was very magnetic to those people. And it's also very repulsive to people that are not in that position because it's very boring to them. Yeah. Oh, so someone who's just looking to get started online is not going to respond to that because they think they have anything they're going to be responding to that here's the five simple ways to get your first 100 subscribers or whatever, which is perfectly fine market, but not for who you want. Okay. Yeah. Cause I guess it was really just help identifying, understanding those particular people better. So I can find more of those, just like things changed since the last mastermind and whatnot. So you were cheering, but that makes some sense there. So I can tell you that from experience incidentally, is I worked with a lot of them and all of their problems,I would say as, as a generalization, so most of their problems are that they're doing a hundred things. One or two of them are making money. And those one or two things that are making money or getting roughly 5% of the attention. So like working with them as million times, easier than taking the beginning code. Sure. Whatever room, like here's how to get clients and all of that kind of stuff, which is kind of hard. Uh, you know, where if you've got a guy that's doing, you know, 3000 transactions a month and he has no cart abandoned sequence, then you can move the needle for that person huge by going all right, dude, put it in a cart. Abandoned sequence. And that's like, it's not that they're dumb as they're having to do 9 million other things. They never even think of that. They can't see the forest through the trees.