How would you make an ad for "the low-hanging fruit?" 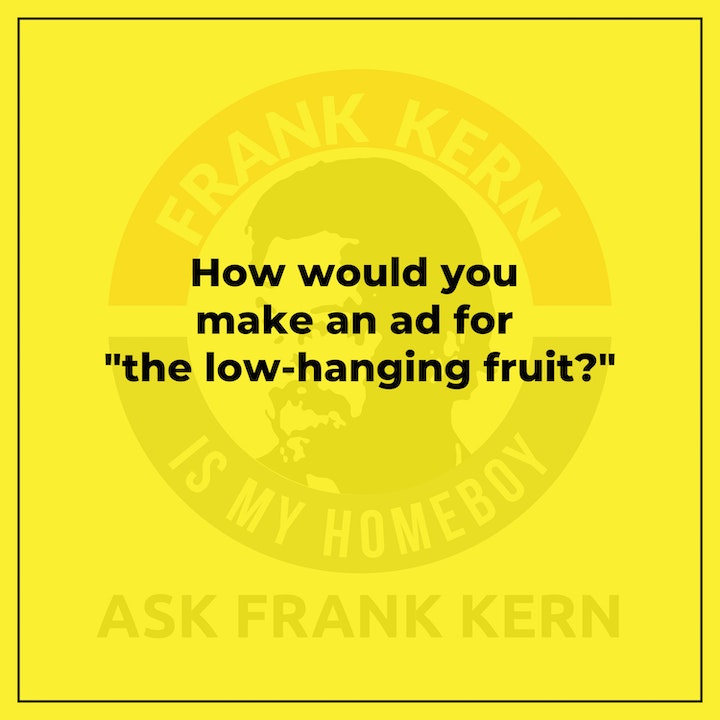 One more question. A friend of mine asked me to help with an ad for a water purification system he sells, but this will be very hard to try to get leads for that. So the lowest hanging fruit is going to be an individual who's thinking about buying...

One more question. You know, a friend of mine asked me for like, helping with that cable ad for the water purification system herself, but these will be very hard to try to get leads for that.
To two people to, to, to buy the system, the  driveway and an old lady say, do you know what? He's the, the, what they're coming for you that, something like that, but doesn't work anything. So the lowest hanging fruit is going to be an individual. Who's thinking about buying a water, the filtration system of which there are pudding.
Right? And so if you have like the phases of markets, you've got people who are ready to buy today and that's who everyone's trying to get. Then he got like, so that's like the middle bullseye. And then you got the people who were maybe going to buy in the next, like 30 to 60 days. They're like thinking about it.
And those are ignored. And then you got people telling you never go, you know, and we don't want to mess with them. So real simple low-hanging fruit thing to do is just to target, like let's say parents, um, the real good target, my guests for this would be real good. Target would be new parents, specifically the mom, because a lot of times new moms, as soon as that baby is born, the world becomes a very hostile place.
That's trying to kill the baby in the mom's side. They're like, everything's dangerous. You know, I mean the Italian, no, don't you dare like pour water from the faucet, you know, into anything. The kids are going to drink it. Like don't let them break the tap water. I'm like, I was a kid I drank from the hose, come on, but whatever, you know, so I would like say, read this if you're thinking about getting a water purification system for your home, because you're getting the people who are thinking about getting a water purification for their home.
So generally speaking of the first pass of this stuff, The more, just obvious that it is the better results you get and then you start trying to get fancy from there.