Using your case study, what's that high level thinking that you use from the beginning all the way to the end result of a campaign? - Frank Kern Greatest Hit 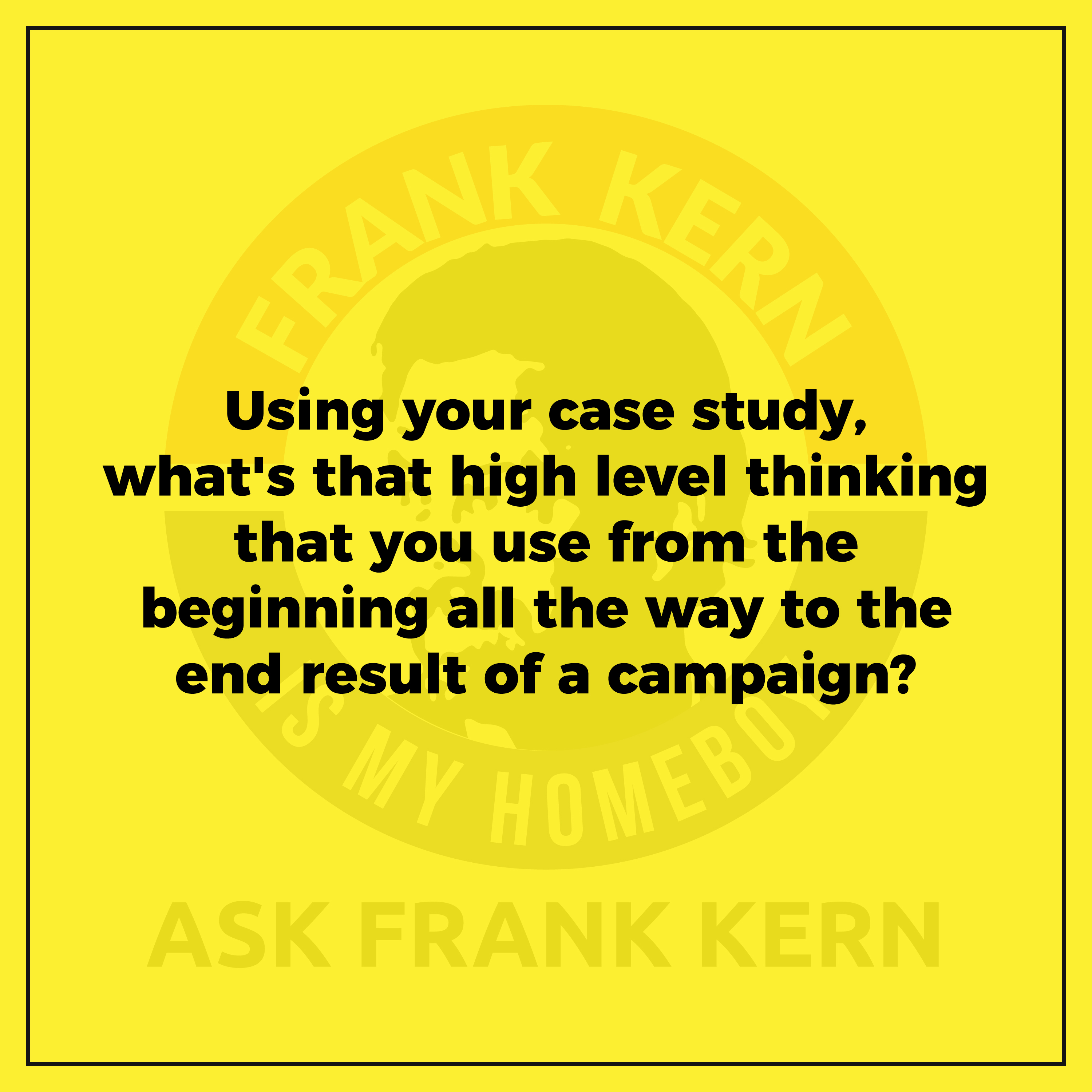 Really my question is wrapped around the case study that you used in the direct presentation that you used to get us into this class where day one was the $1.80 ad spend and then eventually you showed the 30 days in May where you spent about $3.50 and...

Season 2 Ask Frank Kern
Transcript
Really my question is wrapped around the case study that you used in the, uh, direct.
Presentation that you use to get us into this class where day one was the dollar 80 ad spend. And then eventually you showed the 30 days in may where you spent about three 50 and generated 600,000 in sales. And so I guess really I'd love to have like a walk through the 30,000 foot view of, you know, you start day one at a dollar 88, you get three days worth of data.
Date, you know, day three to six day six to nine. What's that high-level thinking that you use from the beginning all the way to the end result of that campaign is that was unbelievable in that presentation. And just to be able to borrow your thinking to use that in anything that I'm directly working on as a media buyer or working on for clients that I'm working with.
I love to use any kind of learning that you had throughout that process going forward. Well prepared to be overwhelmed or underwhelmed. This is why I'm laughing. Um, so day one is always really cheap because if you recall, like I'll, I'll build one audience, you know, and I'll set it for like five bucks and then I'll wait for it to get approved before I start doing the other ones.
So that's what happened on day one and not a lot, you know, I didn't sell anything when they want us not like, Oh, Holy shit, we got a lot of sales, but then I had more ad sets and everything. And so that was a conversion ad. That went straight to, um, time to get sales, which is off the market now. I mean, y'all can go, it'll just say expired.
You know, I bought it. It was awesome. Awesome program. Cool. Thank you. I'm glad you took it. Yeah, so it went there. And so essentially here was the thinking some bitch at work let's scale. It. And then like, so I bump it up a little bit and I'd be like, somebody that's at work let's scale it. And so after a while, what happens is let's scale.
It becomes, okay. Now we've got to go into different media buying strategies. So, you know, there's, there's the miser method, which is one. And then we'll go into this and the maximizer thing, but I'll tell you about it now. I don't, um, Let's say we got, you know, we finally find a batch of 10 audiences and they're working, you know, so, and then we duplicate them when we raised the budgets.
Well, another thing you wanna do is duplicate that sucker and then turn it into CVO. And then another thing you want to do is duplicate that sucker. And then like, let's say it's a thousand dollar a day budget. You turn it to CBO, but you say. Um, I can't remember the terminology when you're setting up the campaign, but you do it at the ad set level.
You say, okay, I want you to spend a minimum per ad set of $10 a day in each ad set and then allocate the rest of it, however you want to do. So that prevents Facebook from doing, you know, it'll get irrational. Sometimes it'd be like, okay, I'll spend the whole budget on the shit, right. Mitigate against that, you know?
And so you do that and then you call that some bitch again. And you'll do a, um, as it's too early for target row has, so you'll do a target cost acquisition. Then you'll do a cost cap, acquisition, bid, uh, strategy on it. And then over time, and this is when it gets like really cool is over time. Once you've been running it for a while and you know, you're constantly refreshing creative at this point because you're spending a lot of money.
Of course. You go and you find this is, so this is so ghetto. I'll show it tomorrow. Um, you go and you like, okay, turn on there. Your date range, you know, from when you started the campaign till today, and you go to the ad set level of all the campaigns, looking at every ad set you've ever had you filter by row as.
Can you take all the ones that were like, you know, one X plus, and you duplicate them into another campaign. You turn on CBO and your bid strategy is minimum row as, and then you set the minimum row. So you've got like a gazillion different bid strategies. Right. I got. Gotcha. And so you basically are having multiple campaigns that are successes on top of each other with different campaign objectives or tweaks inside of them.
Is that what I hear you saying? Yeah. And I'm also constantly trying new stuff. And so once you start doing it and now you get enough data to create lookalikes, so then we'll start tax as well. You know, it's like, okay, let's do the same miser shit, but with a bunch of lookalikes, I see. So it's like, you kind of get to a point probably around day 10 to day 15, and then you go, okay, got to refresh the creative here, refresh it there, change budget here, you know, modify my strategy in the next campaign.
So it's, it seems very iterative, probably every three to six days. You're thinking, okay. Duplicate the ad sets into the new campaign, new strategy. Um, you know, that's, that's the challenge where I'm at right now in my skillset. So this maximizer program looks like something definitely worth considering.
Because we'll be able to address that kind of stuff.