What do you recommend for Book funnels in terms of advertising? Any minor adjustments you'd recommend to your IBB for this model? - Frank Kern Greatest Hit 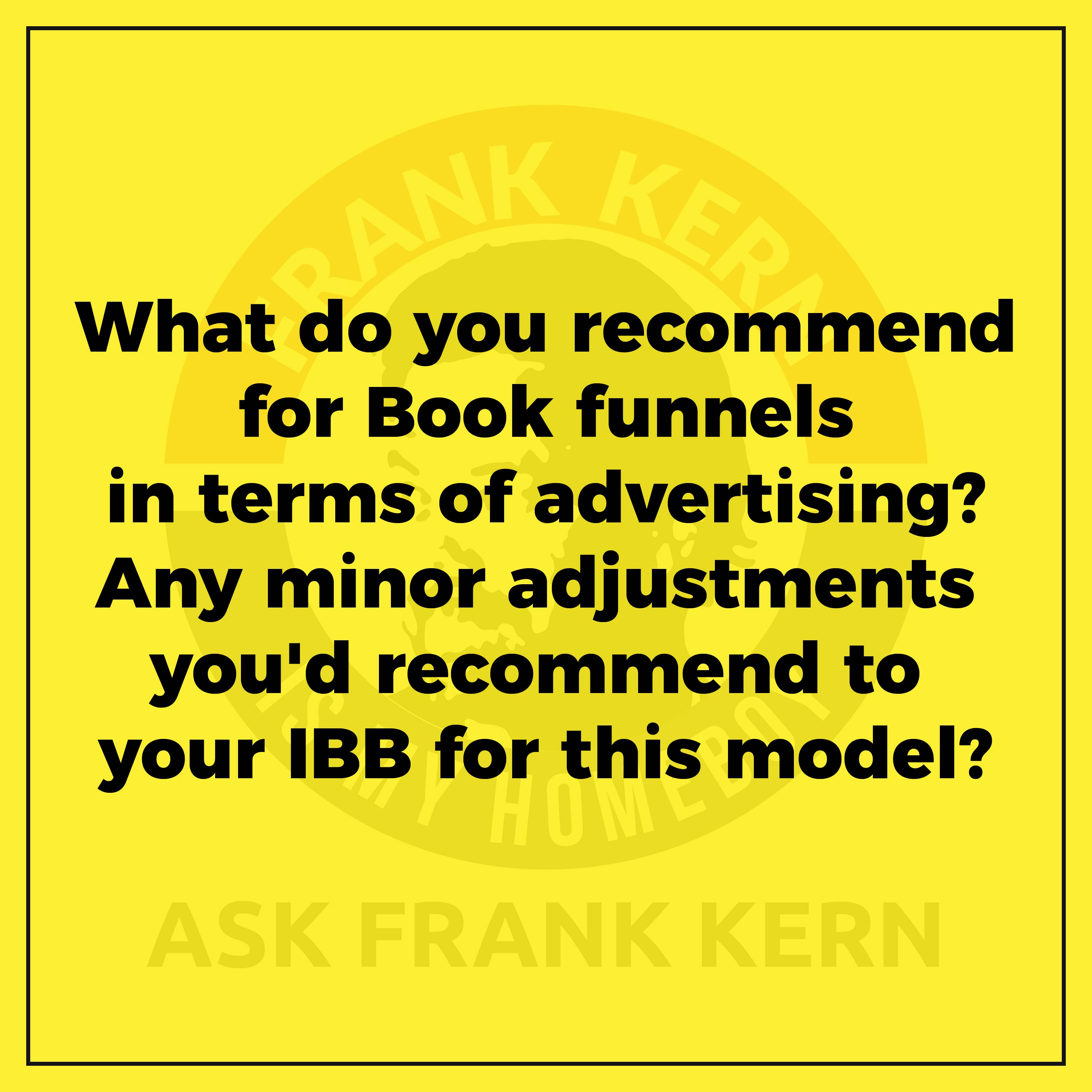 What do you recommend for Book funnels in terms of advertising? Alright. Specifically referencing my Intent Based Branding methodology. And so I will give that answer regardless of methodology. So if the objective of the campaign is to sell a book,...

Season 2 Ask Frank Kern
Transcript
What do you recommend for Book funnels in terms of advertising? Alright. Specifically referencing my Intent Based Branding methodology. And so I will give that answer regardless of methodology. So if the objective of the campaign is to sell a book, you first have to look at what is the objective of selling the book. Do you want to make an immediate profit during that? Do you want them to consume the book and then become fans and then buy more stuff later. What's the end result?

The reason I ask is because if you look at a traditional book funnel, within the context of like the internet marketing world or whatever. It's very rare that it's okay. Here's a book. See you later. Usually there's the book and then there's the order bump. And then there's the seven and a half million one click upsells. Then, then there's a webinar at the end of it or something that sells the main thing. So prior to running any ads to a book funnel, I would make sure all of those pieces are in place. I would also look at where all of those pieces will break in build plugs, I guess, metaphorically speaking, to plug the holes in the inevitably leaky bucket. All right. So I still haven't answered the question and this is deliberate. I will in a minute, but I don't. They want to have someone sending traffic to a broken machine. So a book funnel, let's say you're following the traditional model, which is book, order bump, a couple of one click upsells. And then a webinar. First thing we got to look at is where's that thing going to break. All right, it's going to break number one and a cart abandonment. So they start to order and they don't, it's also going to break where they. See the first one click up sell, but they don't take it. It's also going to break where they see the second OneClickUpsell and they don't take it. It's all going to break where they have the opportunity to register for the backend webinar and they don't register. It's also going to break where they register and don't show up. It's also going to break where they register. They show up, but they leave early. And finally, it's going to break where they register. Show up. Stay see the pitch and don't buy and buy break. I don't mean like technically break. I mean that this is where people can drop out of the funnel. Right. So if you. Go into the situation, knowing, okay, here are all the places where the bucket can metaphor. If we have holes, I would strongly recommend plugging those holes first, before spending money on the ads. And it's very, very simple. So number one, First place that could possibly break is court abandon. They start to order they don't, let's put a deadline sequence in there to drive them back, give them an extra bonus for something to complete the order. Second place that's going to break as they don't take some of the upsells. Well with. So, you know, solutions like click funnels and Infusionsoft using plus this and probably Kartra as well. And probably all of them, you can now email people directly to a OneClickUpsell link and they can go back and purchase that one, click that stuff. So I would put a little deadline sequences for the one click upsells, and then I would do the same for every other little part of the funnel. That means that as you send people to buy the book, you're going to get the maximum revenue you can out of every book buyer. And the reason I'm saying this is because let's say your book is six bucks, just randomly choosing the number six doctors there. There's probably depending on the market that you're selling to, it's probably going to cost you anywhere from. 15 to $35 to sell that $6 book. So you've got that, all that other stuff in place in order to not go. Super negative. Right? So now let's talk about how to run the ads. Here's how I like to run ads. What I advise everybody to do, right. Or two that you think is pretty good. Don't spend all day on it. I know there's like all these theories, you know, the ads should be like an article or no, no, the ads should be short and punchy or no, the ad should be a long store, a long form. That fit Laden, almost like a sales letter, or know the ads should be controversial, then it should be shareable and it should go viral. You know, the answer to that is, are they right or wrong? There's no, none of us know because you just need to run the stupid ad.

So what I recommend is just write a couple of them that are probably okay. Right. And then instead of doing what most people do, which is to try to find the perfect customer avatar and do the perfect targeting. What you do is you go out and find yourself like 10 or 15 audiences that I don't know might work. And then you show those okay. Ads to them. But you only spend a couple of bucks a day per audience, and you turn that sucker on. And you'll walk away and you walk away for about four days, and it's a very difficult four days because you going to want to hit refresh on your stats roughly 30 million times, but don't just go away. And let the machine run. When you come back four days later, you'll see that probably this is generally the case. Most of the audiences, nobody bought anything or they didn't sign up and whatever the objective is in this case, it's the book. Right. And. Some of them did. And so what you do is you turn off the ones that didn't work and then you leave the ones that worked on and you increase the budgets and then you proceed with the next level, which would be scaling that. And so that's what I recommend everybody to do, regardless of whether they're using intent based branding or whatever. Um, and the reason I would start with that start directly with conversion based ads is because even if someone. Clicks on one of your ads and they don't purchase, or they engage with it or they share it or whatever, you can still retarget them. So you're still building that invisible retargeting list regardless. So anyway, long answer to a relatively simple question, but you know, the things we do to get out of having the right copy.