You’ve lost everything and you’re starting from scratch. Your goal is to make $100K as quickly as possible. You’ve got $10K to your name. How would you do it? 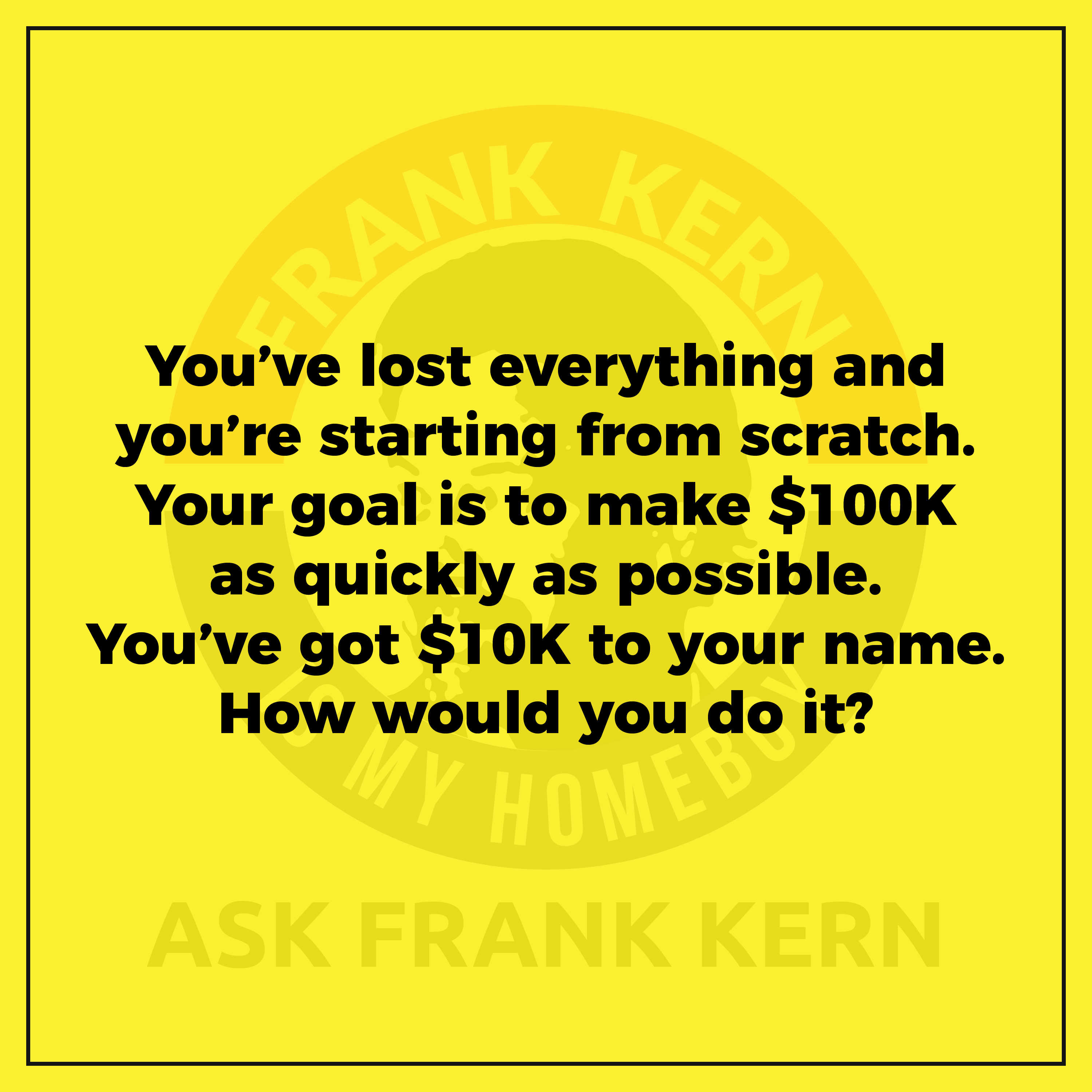 Here's the question I get all the time... You've lost everything and you're starting from scratch. Your goal is to make $100K as quickly as possible. You've got $10K to your name. How would you do it? Alright. I would, and I advise everyone to do this...

Here's the question I get all the time. You've lost everything. And you're starting from scratch. Your goal is to make a hundred grand as quickly as possible. You've got 10 K to your name. How would you do it? All right. I would, uh, and I advise everyone to do this one.
Sean, I'll tell you the tactical thing, but here's the strategic thinking use what you got. Okay. So in my case, I've got a skill set. I can write words and do things that make the phone ring, make people come in the door at cetera. So I would keep my $10,000. And considering that I had was starting from scratch and like literally, you know, I got four kids and it's a pretty, pretty big bill to take care of him.
I'd go out and beat the bushes, man. And I would go to businesses and I'd say, Hey, here's what I can do. And I'm willing to do it for you for very little money. And the reason why is because I'm starting from scratch it. Uh, I know you're going to do a, I know you're going to be happy with this. And, um, if you like it, then keep paying me and we can talk about charging a little bit more money later on.
But right now I'm just trying to get my foot in the door. And then I would like. Get them customers. And I think the lowest hanging fruit for that incidentally is brick and mortar companies. Um, I think there's a massive blue ocean for someone and it probably won't be me because I don't feel like building the infrastructure to do it.
Um, but I think there's a massive opportunity for somebody to go to barbershops hair salons, restaurants, places that would normally advertise on television. And go to them and then just run video ads on social for very little money, you know? So like I would charge 600 bucks, six, 700 bucks a month or something, and then whatever they want to spend and I would do the targeting and I would manage that and it would be straight up video views and replace their TV spend with.
Videos on the phone. Cause you're having the exact same effect for fractions of pennies on the dollar. And I think they would get that increased foot traffic in much greater volume than they would from that TV spend. So that's one of the things that, uh, I would, I would probably do cause it's you got a market that's irrationally passionate, great.
And number and easily reached in us the small business owner. Um, but yeah, I'd hold on my 10 K though. You know, I'd say that and I would get rid of all pride, get rid of all ego. And I say, man, you know what? This is embarrassing as hell. I have totally screwed up and lost everything. Um, I'm going to do this for you for next to nothing.
And, uh, if it works, then we can talk about me doing it for you for a little bit more, or just not charging that much and you know, pretty good margin on that kind of thing anyway. So we'll see. All right. Thank you for the, uh, Thank you for the question there.